The generation of internal waves at abyssal hills has been proposed as an important source of bottom-intensified mixing and a sink of geostrophic momentum. Using the theory of Bell (1975), previous work has calculated either the generation of lee waves by geostrophic flow, or the generation of the internal tide by the barotropic tide, but never both together. However, the Bell (1975) theory shows that the two are interdependent: that is, the presence of a barotropic tide modifies the generation of lee waves, and the presence of a geostrophic (time-mean) flow modifies the generation of the internal tide. I will discuss an extension to the Bell (1975) theory to incorporate multiple tidal constituents. Recalculating global wave fluxes of energy and momentum using the extended theory results in a total globally-integrated wave energy flux that is an order-of-magnitude smaller than the value obtained by previous calculations. The generated wave flux is dominated by the principal lunar semi-diurnal tide (M2), its harmonics and combinations, with the strongest fluxes occurring along mid-ocean ridges. The internal tide generation is strongly asymmetric owing to Doppler shifting by the geostrophic abyssal flow, with 75% of the wave energy flux (and stress) directed upstream, against the geostrophic flow. As a consequence, there is a net wave stress associated with generation of the internal tide which reaches magnitudes of 0.01 - 0.1 N/m^2 in the vicinity of mid-ocean ridges. In light of these results, recent parameterisations for wave drag and wave driven mixing at abyssal hills need to be revised to consider the interdependence of wave generation by barotropic tides and geostrophic flow. 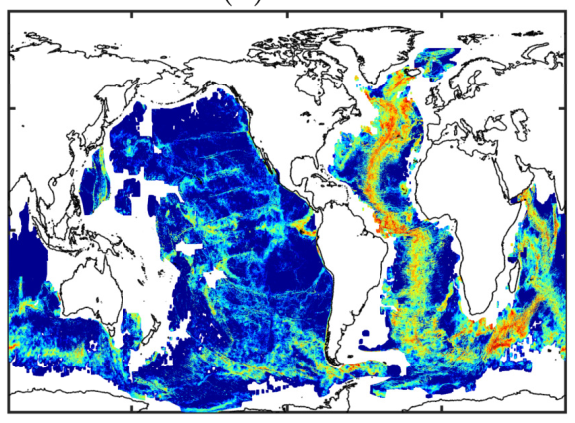 Back to: Multiscale Topographic Effects on Large-Scale Flow: From Wakes and Lee Waves to Small-Scale Turbulence and Mixing I