A new one-dimensional parameterization of penetrative deep convection
has been developed for ocean general circulation models (OGCMs). This work is
motivated by the necessity for OGCMs to better represent the vertical mixing,
the production and properties of deep and intermediate waters, the overflows
and the transport of biogeochemical materials. Our approach is inspired from
atmospheric parameterizations of shallow convection which assumes that in the
convective boundary layer, the subgrid-scale fluxes result from two different
mixing scales : small eddies which are represented by an eddy-diffusivity
contribution, and large eddies associated with thermals which are represented
by a mass-flux contribution. The local (small eddies) and non-local
(large eddies) contributions are unified into an Eddy-Diffusivity-Mass-Flux
(EDMF) parameterization which treats simultaneously the whole vertical mixing.
EDMF is implemented and tested into the communautary ocean model NEMO. Deepening of dense water in 1D analytic cases, sucessfully reproduced in LES simulations, is significantly better captured with EDMF than with standard diffusion parameterizations. Also the convective events observed during winter 2013 in the western Mediterranean at the Lion station are more realistic in terms of sequencing and intensity with EDMF. We show that the best performances of EDMF are due to a best representation of the non-local entrainment fluxes which are counter-gradient in the stratified zone of the thermocline. 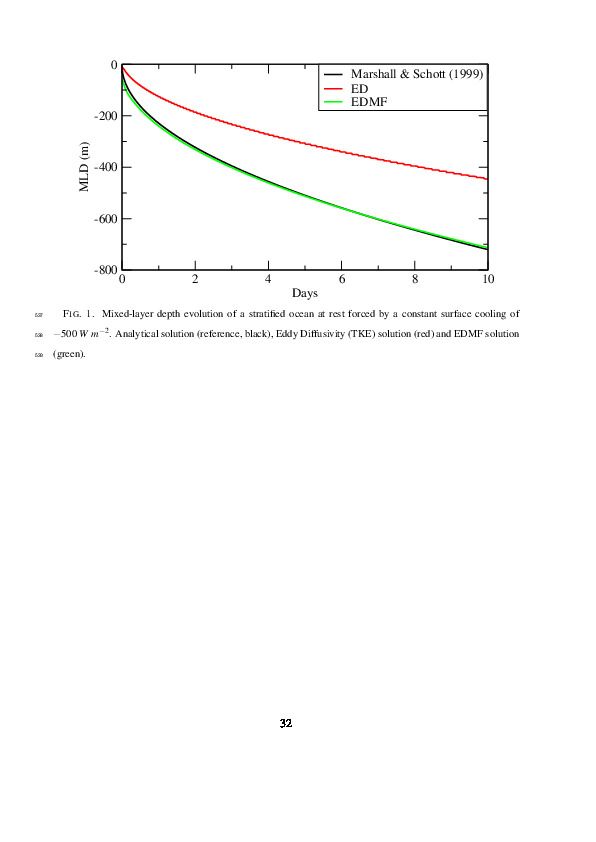 Back to: Turbulent Mixing of the Ocean Surface Boundary Layer: Observation, Simulation, and Parameterization I