Understanding the Role of Nutrient Limitation on Plankton Biomass over Arabian Sea via 1-D Coupled Biogeochemical Model and Bio-Argo Observations.

Arabian Sea (AS) is known to have seasonal phytoplankton blooms during winter and summer driven by distinctive physical forcing mechanisms and associated nutrient dynamics. A 1-D coupled physical-biogeochemical model based on North Pacifc Ecosystem Model for Understanding Regional Oceanography (NEMURO) with nitrogen and silicon has been adapted for the AS environment and implemented to investigate the role of nutrient limitation (in terms of new production, regenerated production and role of silicate as a limiter) on plankton biomass. Seasonal cycle of plankton biomass is well simulated along five bio-Argo and few ship cruise tracks during the period 2009 to 2016. To understand the nutrient limitation, three sensitivity simulations are conducted by suppressing (1) nitrate availability (representing new production; Case-I), (2) ammonium availability (representing regenerated production; Case-II) for total primary production and (3) silicate availability (for diatom production; Case-III). The new production appears to support 80% of the total primary production in the AS which implicitly controls a 70% of total zooplankton production perennially. The regenerated production
augments small phytoplankton (by ~50%; e.g. flagellates) and small zooplankton (by ~20%; e.g. ciliates) growth rates, with negligible effects on large phytoplankton (e.g. diatom) and predatory zooplankton (e.g. copepods). Diatom production is regulated approximately by an order of magnitude due to the silicate cycling which is fundamental in the model for realistic simulation of chlorophyll as compared to observations. Silicate is the prime limiter in diatom bloom in the subsurface chlorophyll maxima (SCM) region with maximum limitation offered during winter season, due to the deeper silicicline as compared to shallower nitricline in the AS. In surface, both nitrate and silicate are equally limiting the biomass production; however, nitrate appears to be potential limiter than silicate during March to May. The study highlights the relative role of silicate versus total nitrogen in establishing the biophysical interactions between lower to upper trophic plankton biomass in AS. 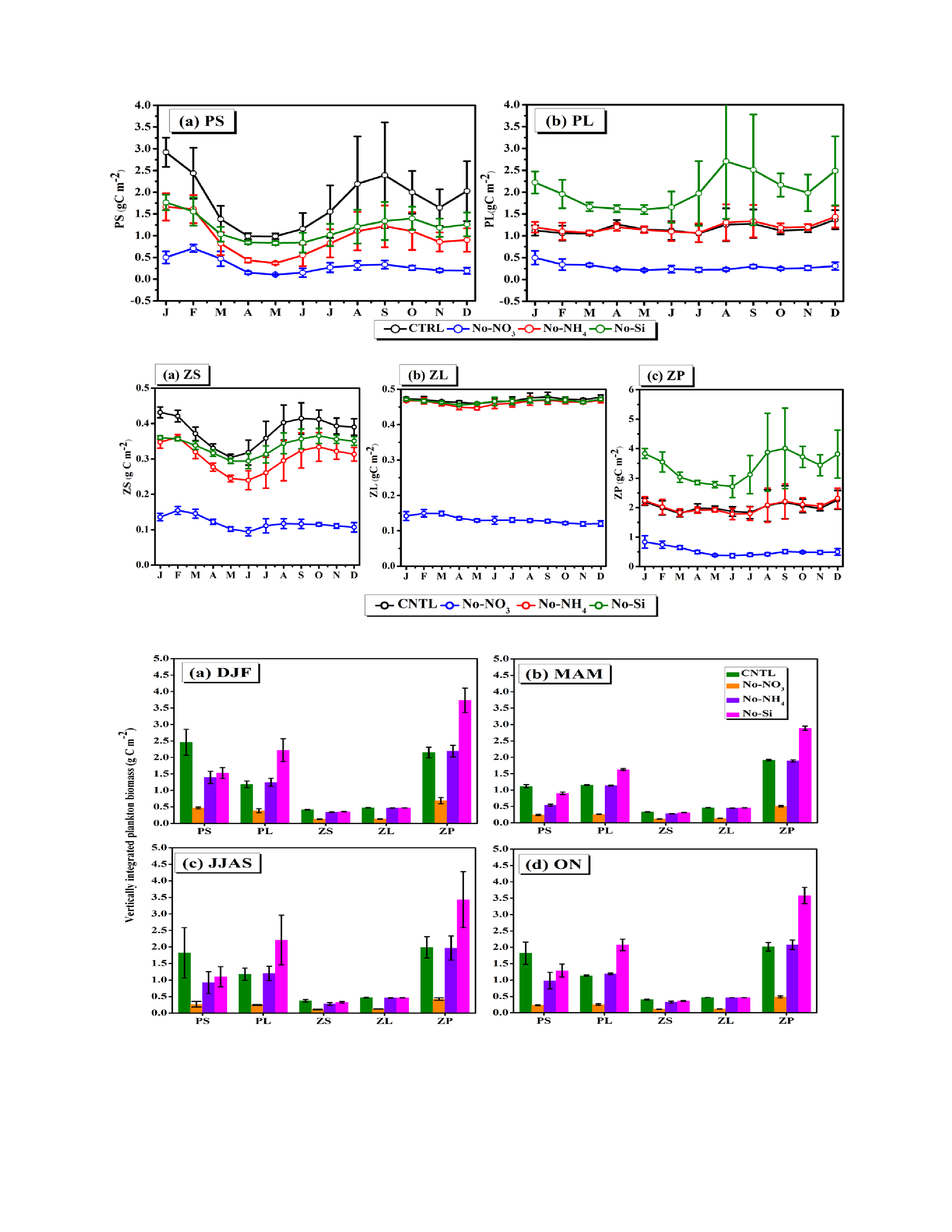 Back to: Structure, Function, and Biogeochemical Role of Plankton Communities in the Nutrient-Limited Open Ocean II