Antarctic Bottom Water (AABW) production, critical to the global overturning circulation, will be negatively impacted by a freshening of dense shelf waters by enhanced ice sheet melting. While the Weddell Sea and Ross Sea were historically recognized as the key sites of AABW production, important contributions have been identified from dense shelf water formed in coastal polynya regions around East Antarctica at the Mertz Glacier, Cape Darnley/Prydz Bay and most recently Vincennes Bay. The Vincennes Bay source is considered the weakest, producing a lower density shelf water that ultimately only contributes to the upper later of offshore Bottom Water. However this increases its significance, as a potential example of an AABW source region that could shutdown in response to ongoing and future change. Here we provide the first detailed oceanography of the Vincennes Bay shelf region and surround using CTD data from instrumented elephant seals. We find extraordinary intrusions of bottom-intensified modified Circumpolar Deep Water during late summer/early fall that is attributed to the influence of fresh meltwater-laden Winter Water from the upstream Totten Glacier. There is likely to be a complex interaction of this mCDW with dense shelf water formation beneath two polynya regions, as the heat flux reduces local sea ice growth but the mCDW provides a positive salinity flux. Into the future, Vincennes Bay will be an important site to monitor the influence of enhanced ice sheet melting on East AABW. 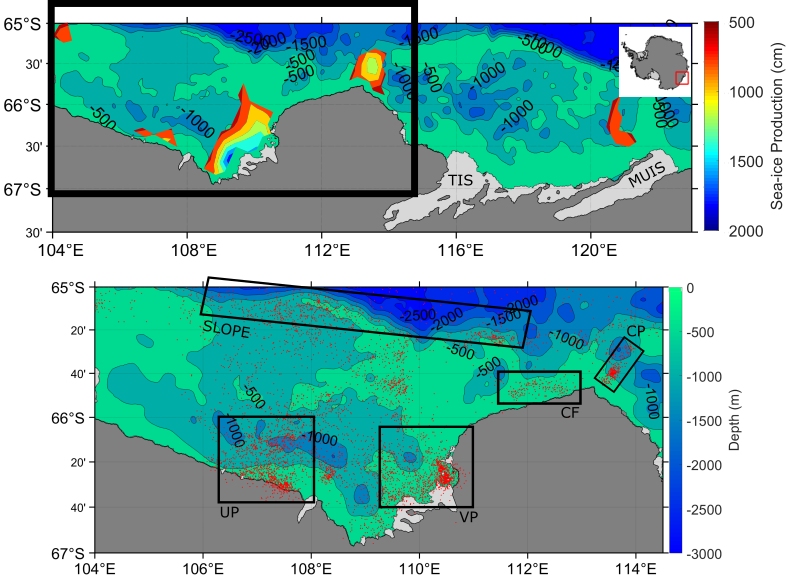 Back to: Ice-Ocean Interactions and Circulation Around the Antarctic Margins I