Water and sanitation studies were taken into consideration to evaluate the environmental impacts of the study Area; hydro-chemical and groundwater quality of Abesan drainage system were investigated through thirty-nine (39) samples composed of boreholes, hand pump wells, traditional wells and surface water from the points of confluence of the three rivers in Abesan drainage system. The analysis of physico-chemical parameters shows that groundwater is acidic with pH ranges from 3.2 to 6.9 and mean of 5.4. Electrical conductivity (EC) values were generally low and minimum and maximum were respectively 135mgl and 553mg/l with an average of 250.3μmg/l.

The problem we face in the world today; the potential effects of global climate change, the hypothesis that human activity causing emissions of greenhouse gases (primarily carbon dioxide) is resulting in global warming, poor management of water and waste, human health challenges, air pollution, natural hazards (such as floods earth movement/slide), many more of which increase in population and human activities are the determine factors. Many scientific research have being carried out to tackle environmental problem and limits its effect. To ensure that science informs and is utilized by those who need it in an accessible and relevant manner, scientists must be deliberate about the societal, environmental and economic benefits of their researches. However, transitioning research into useful applications is often challenging and requires an understanding of stakeholder needs, well-designed scientific research, collaborative partnerships, effective communication and outreach strategies, and adequate resources for transition.

Interacting with the society, by the usage of outreach, engagement and impactful measures is a better means of communicating/or engaging the society on the information of environmental impacts, planning, law and other resolution in local, regional, and global scales. Every members of the society needs to have full awareness the global warming is occurring, and there is a human component of the warming produced by burning fossil fuels.

The subjects of environmental impact analysis and land use planning are important because our approach to these subjects reflects our commitment to the environment at all levels. The important field of environmental law is assisting us in problem-solving and mediation rather than confrontation and adversarial positions when dealing with environmental matters. The main point is that if we are going to achieve sustainability, we need to carefully consider important links between environmental impact, the environment itself, and society. For example, we are just beginning to understand more fully the relationship between our mining environment, human health and the incidence of chronic and acute diseases, including heart disease and cancer.

The geology is underlain by inter-bedded sands, gravelly sands, silts and clay. The hydrology is dominated by River Owo and its tributaries (River Abesan, River Oponu and River Illo).

Geomorphologically, the study area is characterized by a gentle topography. The dominant vegetation of this area is the swamp forest of the coastal belt which is influenced by the double rainfall pattern. The soil is composed of red and sandy-clay (laterite).The vegetation is composed of swamp forest and coastal plants. The climate in Lagos within which the study area is located is similar to that of the rest of the southern Nigeria. Average temperature highs and lows for Lagos are 31°C and 23°C in January and 28°C and 23°C in June. The mean annual precipitation is about 1,900 mm. The population is about 1,277,714 people with a density of about 6,899 people per km2. The sources of water supply in the area include pipe borne water through the Lagos Water Corporation (LWC), boreholes and hand dug wells by private individual. Due to erratic power supply and the unwillingness of the people to pay and because the people believed water supply should be free of charge. Hence majority of the inhabitants has resorted to digging boreholes/hand dug wells as sources of water supply for drinking and other domestic uses.

GEOLOGY OF THE STUDY AREA

The geologic successions in Lagos spans through the Cretaceous Abeokuta Formation, which unconformably overlies the rocks of the Basement Complex, to the Quaternary deltaic Plain Sands. Alimosho within which the survey area is located is directly underlain by the Benin/Dahomey Formation (Omotsola& Adegoke, 1981).

The Benin/Dahomey Formation consists largely of sands/sandstones with lenses of shale and clay. It provides a ready answer to the groundwater problems of a good portion of Lagos State especially where it is characterized by pebbly beds. Noteworthy, however is that the arenaceous nature of the Benin Formation makes it susceptible to contamination from anthropogenic sources. The Ilaro Formation consists of fine to coarse sands alternating with shale and clay. This formation though consisting of aquifers, can only sustain poor boreholes. The Ewekoro/Akinbo/Oshosun formations consist of a sequence of sandstones, shales, limestones and clays. Though the Ewekoro Formation could consist of several aquifers, its argillaceous nature recommends it as being of poor groundwater potential.

The Abeokuta Formation consists of Arkosic sandstones and grits, tending towards being carbonaceous at the base. This formation has good potential for groundwater except that the bituminous materials associated with the sands could possibly affect the quality of the water. Noteworthy is that all these formations are multi-aquiferous.

The base of the sedimentary basin in the dahomey basin consists of unfossiferous sandstones and gravels weathered from underlying Precambrian Basement. On top of this area the marine shale, sandstone and limestone of Albian to Santonian ages deposited prior to the Santonian tectonic episode. The next depositional cycle began with the transgression that lasted into the Maastrichtian. The geological sequence in the Dahomey basin extends from Precambrian to Recent. The onshore part of the basin covers a broad arc-shaped profile of about 600km2 in extent. The onshore of the basin attains a maximum width along its N-S axis, some 130km around the Nigeria-Republic of Benin border. The basin narrows to about 50km on the eastern side where the basement is assumes a con vex upwards outline with the concomitant thinning of sediments. Along the Northeastern fringe of the basin where it rims the Okitipupa high, is a brand of tar (oil) sands and bitumen seepages (Nwachwkwu E Kweozor, 1989).

To relate environmental science to the society, environmental impact survey were carried out in thirty-nine (39) water samples composed of boreholes, hand pump wells, traditional wells, canals and surface water from the points of confluence of the three rivers in Abesan drainage system. Dump sites were also investigated in Igando and other places within the study environ.

High iron level noticed in water samples is characteristic of groundwater in Lagos environs which is due to the local geology .Studies have also shown that excessive dissolved iron and manganese concentrations in groundwater result in taste and precipitation problems. Heavy doses of chromium salts even though are rapidly eliminated from human body, could corrode the intestinal tract (WHO, 2004). Similarly, heavy metals such as lead, cadmium, chromium and copper have also been reported at excessive levels in groundwater in parts of the state due to landfill operations.

In Abesan drainage system, some rivers/streams channel are been converted to canals which are contaminated by the release on pollutants whose source may be in two categories; point source and non-point source.

The communities within the study environ are facing multiple stressors including impacts of development, resource extraction, and climate change, health challenges creating a need for timely translation of science into progressive management and policy. To ensure that science informs and is utilized by those who need it in an accessible and relevant manner, scientists must be deliberate about the societal, environmental and economic benefits of their research. However, transitioning research into useful applications is often challenging and requires an understanding of stakeholder needs, well-designed scientific research, collaborative partnerships, effective communication and outreach strategies, and adequate resources for transition

Disposal of solid waste is primarily an urban problem. In some areas, infectious waste from hospitals and clinics, abattoir, plastics waste, chimney, can create problems if it is not properly sterilized/ collected for recycling before disposal. Some hospitals have facilities to incinerate such waste. In study area, huge quantities of toxic materials may also end up at disposal sites to which some of the well accessed are located.

The quality of groundwater samples of the study area was assessed based on contamination index (i.e., factors of single component that exceed the maximum permissible concentration of water quality parameter according to WHO standard). 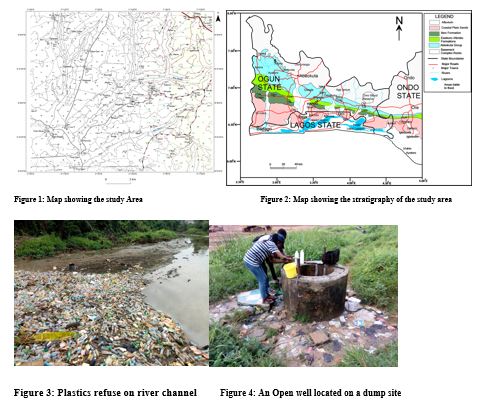