Every winter convective overturning creates a well-ventilated mixed layer in the deep basin of the Labrador Sea. However, according to ship survey and profiling Argo float data, the depth of winter convection can vary significantly from year to year ranging from several hundred metres to 2500 m. The mixed layer depth and other properties acquired at the end of a typical convection cycle are defined by severity of atmospheric forcing in winter expressed in a cumulative surface heat loss, advection of freshwater and salt stratifying the upper layer, and preconditioning of deeper layers by sustained convective mixing of previous winters. A moderate to deep winter convection creates an intermediate water mass of the North Atlantic known as the Labrador Sea Water (LSW). The LSW properties vary on inter-annual to multi-decadal scales and these changes can be followed to remote ocean locations.

We will present and discuss the two approaches used in physical oceanography and marine chemistry for definition of LSW and its various modifications and cover the range of their applications. We will then cover the factors and processes responsible for development of prominent LSW classes sustained over several years, and discuss major developments in the LSW production over the past 80 years and their impact on ocean climate and circulation. One of the most interesting episodes in the LSW record is a gradual increase in the convection depth and in the density of renewed LSW lasting for straight five years, 2014-2018. This marked the most recent increase in convective activity in the subpolar North Atlantic that came to its abrupt end in 2019. Indeed, if convection in the Labrador Sea reached and exceeded 2000 m in the winter of 2018, it was typically no deeper than 1000 m in 2019. Figure presents the time-depth temperature, salinity and density progressions in the central Labrador Sea based on ship survey and profiling Argo float data. The data compiled for this figure only does not extend beyond the start of 2019 when the vertical mixing reached 900 m. However, a ship survey of the Labrador Sea conducted under the Atlantic Zone Off-Shelf Monitoring Program (Fisheries and Oceans Canada) in June of 2019 has confirmed the drastic shallowing of convection that occurred last winter. We will investigate this event and its causes more closely. 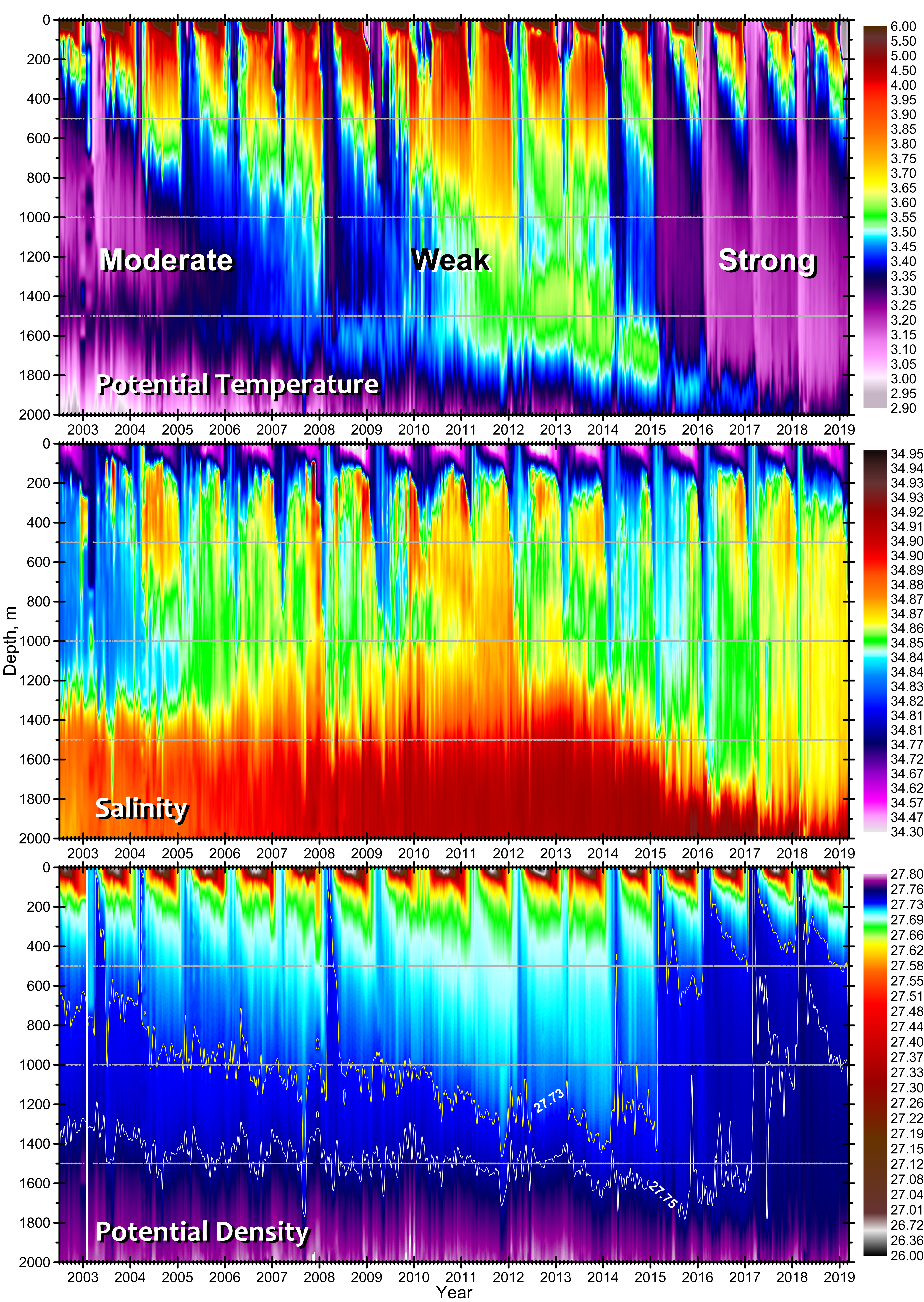 Back to: Arctic-North Atlantic Connectivity: Variability, Changes, and Impacts of Freshwater and Heat Exchange II