The northern European shelf as increasing net sink for CO2

With the increasing need for carbon emission budgets on regional and national level, also the direct need for precise, high resolution flux estimates of the coastal oceans increased. Current estimates of the ocean carbon sink are either based on open ocean only and/or have a resolution that is too small to resolve coastal variability appropriately. The coastal oceans show a high heterogeneity regarding their biogeochemical characteristics, their reaction on climate change and anthropogenic pressure and, thus, their potential as a carbon sink.

We developed an MLR (Multi-Linear Regression) based method that estimates coastal fCO2 and air-sea CO2 fluxes using a set of sea water characteristics such as sea surface temperature, salinity and chlorophyll concentration, as well as the pCO2 in the closest grid-cell of an open ocean pCO2 map as driver variables. By doing this we achieve a homogeneous transition from the open ocean towards the coast. Based on this method we estimate the trends of fCO2, pH and air-sea CO2 flux for the northern European shelf region.

While most of the regions are net, and increasing sinks, the southern North Sea and the Baltic Sea acted as a source for CO2. The trends in surface ocean fCO2 determined from these maps are smaller than the atmospheric trend in most of the studied region. Only the western part of the North Sea is showing an increase in fCO2 close to 2 atm yr-1. The Baltic Sea does not show a significant trend. By applying a salinity-alkalinity correlation we also calculated monthly maps of pH and determined the trends in pH in the North Sea, along the Norwegian Coast and in the Barents Sea. The pH trend was decreasing towards the east and north, according to the also lower trend in fCO2 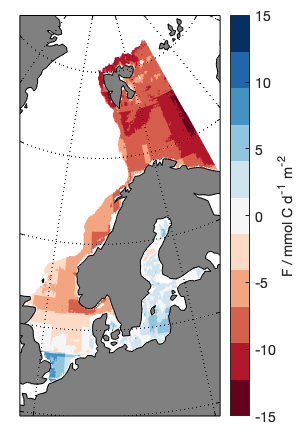 Back to: Interdisciplinary Approaches for Understanding Coastal Ocean Carbon and Biogeochemical Processes and Budgets I