As an archipelago located in the deep ocean, the Madeira Archipelago is vulnerable to extreme weather events. However, permanent monitoring of coastal areas is often associated with costly solutions. In addition, satellite images with valid ocean surface information for the archipelago are scarce due to extensive cloud cover and/or limited resolution. Existing forecasting models are insufficient to represent most of the island-scale phenomena.

To this end, the Madeira Ocean Observatory implemented a coupled air-sea-land modeling framework. The Coupled Ocean Atmosphere Wave Sediment Transport Modeling System is a numerical system that aggregates three distinct models: The Weather Research and Forecasting (WRF), for atmosphere; the Regional Ocean Modeling System (ROMS), for ocean circulation; and the Simulating Waves Nearshore (SWAN), for waves. The exchange of variables between the different models is done through the Modeling Coupling Toolkit. The modeling system was implemented for an area centered on the island by downscaling methods, initiated by global model solutions.

Current efforts include the enhancement of land surface process that affect the coastal region, including the representation of stormwater flows in urban settings and their impacts. As part of the ‘CleanAtlantic’ project, whose main objective is to study the transport and retention of marine litter, this numerical framework is being used to simulate extreme historical events for later conjugation with the Lagrangian model (in offline mode). In addition to particles of exogenous origin, river discharges from the island watercourses will be considered as a source of land-based pollution. To this end, the MOHID-Land watershed model is being used.

The (partial) validation of the prediction system has been performed using data from island-based weather stations, high frequency radars, wave buoys, as well as point measurements of acoustic current meters and drift buoys. 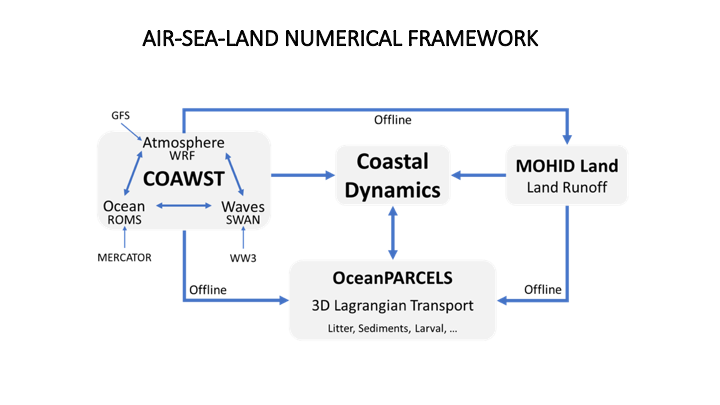 Back to: Triumphs and Disasters: Coastal, Marine, and Oceanographic Research in Small Island/Archipelago Settings I Posters