Floating Debris Accumulation in the North Pacific “Garbage Patch”, Studied with a Suite of Lagrangian Instruments

“FloatEco” is an interdisciplinary project funded by the NASA Physical Oceanography and Biodiversity and Ecological Forecasting Science Teams to study physical and biological processes maintaining the floating ecosystem in the eastern North Pacific, associated with the so-called “garbage patch”, the area famous for accumulation of artificial marine debris. Floating matter is an important substrate for the pelagic ecosystem and man-made debris traveling over long distances provides a new vector for biological dispersion and transport of invasive species.

To study how objects of different geometry and buoyancy are moved by a complex combination of physical processes (vertically sheared currents, waves, turbulence, direct wind force, etc.), we designed and deployed a suite of Lagrangian instruments, including a set of drifters with the drogue depth varying between 2 and 20 meters and the drogue height ranging between 2 and 6 meters. In this paper we present results of preliminary analysis of drifter trajectories and their interaction with ocean currents on a broad range of scales: from convergence toward the migrating garbage patch center to interaction with mesoscale and submesoscale eddies and features.

Drifters’ response to the wind and different ocean conditions is compared with the trajectories of satellite trackers attached to real debris (mostly derelict fishing nets but also a boat and smaller objects) to facilitate its removal in cleanup operations. To study transport of microplastics and plankton, a mixed layer float is built and programmed to reproduce vertical migrations of these weakly buoyant particles.

Biological samples, collected from the debris, drifters, and float reveal remarkable changes taking place in the pelagic ecosystem, with establishment of new species that were earlier known as coastal. The project has a strong citizen science component and relies on data collection and instrument deployment and retrieval by volunteers and external partners. 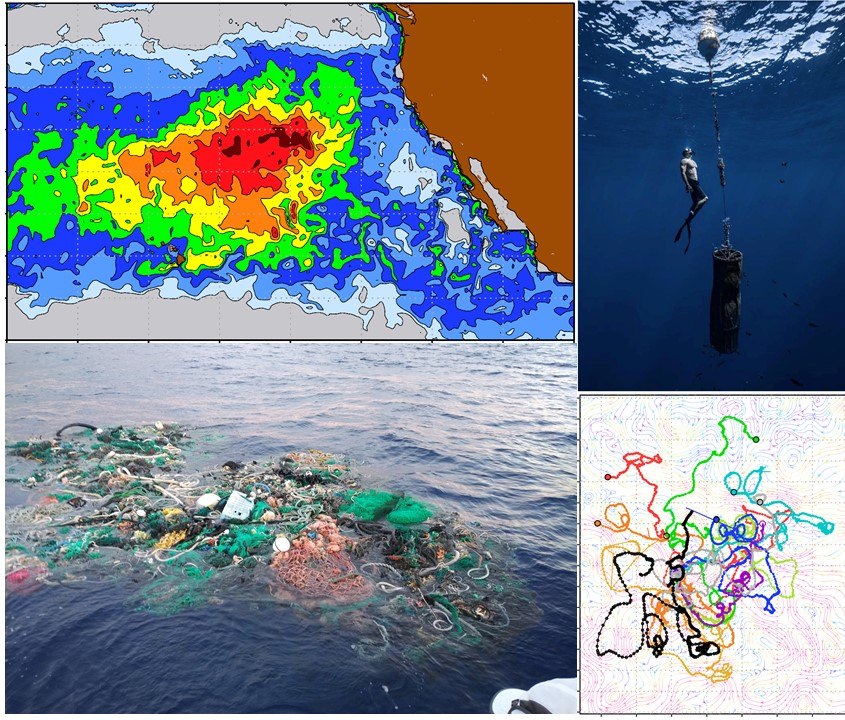 Back to: Physical Processes Governing the Distribution and Transport of Dispersed Particles in the Ocean I