R/V Mirai entered the anomalously open Chukchi Sea with low ice coverage in November 2018 and conducted unique daily measurements along a fixed transect toward the sea ice edge near the shelf slope. The sea ice advanced from the 9th to 13th under moderate off-ice winds and paused during on-ice wind conditions from 13th to 15th. Under a favorable condition for ice formation during the off-ice wind conditions over 10m/s from 16th to 21st, the sea ice advance was minimal. In-situ measurements of seawater temperature revealed that anomalous heat was stored over the Chukchi shelf and slowed down the local sea-ice advance.

The interannual variation of the November SST in the Bering and Chukchi Seas is found to be highly correlated with the annual Pacific Decadal Oscillation (PDO) index. The high correlation indicates PDO is potentially influential on the interannual variation of the Chukchi Sea SST. It should not be however the factor of the high SST found in November 2018 because the PDO index is close to zero in 2018. The warm SST over the Chukchi Sea in November 2018 seems preconditioned by the unusual wind pattern in September 2018. With the southerly wind driven transport, a large amount of heat is likely injected to the Chukchi Sea. Based on the atmospheric reanalyses, the air-sea surface heat flux was also increased although the influence was smaller. 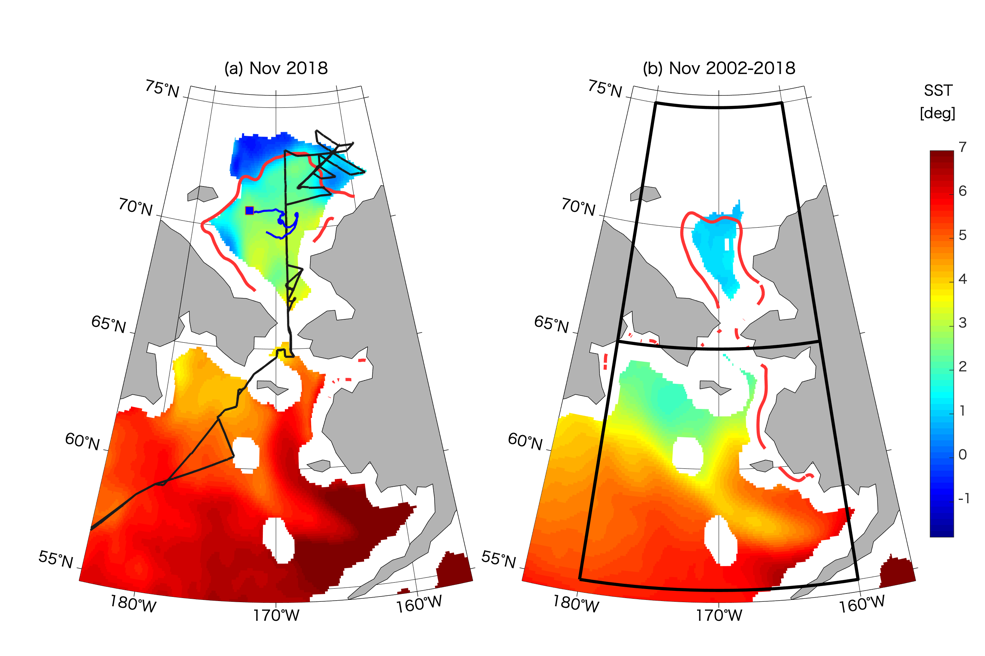 Back to: The Changing Thermohaline Structure of the Arctic Ocean: Mechanisms and Impacts II Posters