How far do buckets get us? A flux tracking, topography driven conceptual lumped convolution model to rival the CAOS model

One of the objectives of the DFG (Deutsche Forschungsgemeinschaft) research group "From Catchments as Organised Systems to Models based on Dynamic Functional Units" (CAOS) is the development of the CAOS model, a physically based, flexible hydrological model for the mesoscale (Westhoff and Zehe, 2014). Aim of this substudy is the development of a more conceptual model, which might help to benchmark the CAOS model in terms of accuracy and computational performance.

The 1.92 km^2 large Colpach catchment lies within the Attert basin in western Luxembourg directly at the Belgian border. Its elevation ranges between 305 and 538 meters above sea level. The dominating land uses are agricultural areas and grasslands on the plateaus and mainly deciduous forests on the hill slopes. Within the headwaters of the Colpach catchment lies the 47 ha large Weierbach research catchment with an elevation range between 460 and 515 m meters above sea level. The Weierbach catchment is predominantly covered by forest vegetation.

A total amount of ten discharge gauges was installed within the Colpach catchment, subdividing it into several, partly nested, subcatchments (see Tab. 1).

At each discharge gauge a Teledyne ISCO automatic water sampler was installed. The initial fix sampling routine of one 100 ml discharge sample every 36 h was later on changed to dynamic discharge triggered samples with a temporal resolution of up to two hours. These discharge samples were subsequently analyzed with an PICARRO cavity ring-down spectroscopy analyzer to determine their stable water isotopic compositions.

We intend to use the available data to develop a lumped catchment model that combines the flux tracking approach described by Hrachowitz et al. (2013) with the topography driven conceptual "FLEX-Topo" modeling approach described by Savenije (2010). Studies by Gharari et al. (2013) and Gao et al. (2014), showed the FLEX-Topo's approach's ability to improve simultaion results by including readily available topographic catchment data into the modeling procedure. However, as soon as a certain complexity is reached, conceptual models face the problems of over-parametrization and equifinality. A modeling approach that allows for flux tracking makes it possible to evaluate a simulation not only by the means of comparing simulated stream discharge responses to observed responses, but also by comparing simulated isotopic compositions to measured isotopic compositions. This will help to constrain the possible model parameter ranges and therefore aid in "getting the right answers for the right reasons" (Kirchner, 2006).

Furthermore, the nested catchment experimental setting creates the opportunity to assess the similarities and differences in catchment functioning and it might be suited to answer the questions of scalability and portability of the results

Methodology of a completed preliminary study

The available data was analyzed according to the "TRANSEP" lumped convolution model approach described by Weiler (2003) and applied in McGuire et al. (2005). In a first step, the effective precipitation was determined by optimizing the parameters of a non linear rainfall loss model (Jakeman and Hornberger, 1993) together with a two parallel linear reservoirs (TPLR) discharge convolution model (Weiler, 2003) to reach an optimal agreement between observed and simulated discharge amounts. The effective precipitation was then used for a mass weighted convolution of the precipitation delta18O values with either a further TPLR or a gamma distribution model (Kirchner, 2000) which was optimized to reach the best agreement between simulated delta18O values in discharge and a series of measured discharge samples. The simulated time period had a length of 12 years.

Results of the completed preliminary study

Figure 2 shows the cumulated response time distributions (based on a TPLR) for all catchments as well as the cumulated transit time distributions (TTDs) according to the two convolution models. The KGE values plotted in Fig. 2 show, that the model failed to simulate the discharge amounts of the subcatchment U appropriately (where, as lately emerged, erroneous discharge data was used) and that
in most cases the three parameter TPLR convolution model reached a higher agreement with the observed isotopic compositions in discharge than the two parameter GM. On the other hand, the three parameters of the TPLR showed a lower identifiability. The overall comparison showed, that the TPLR model tended to imply higher mean transit times (MTTs) than the GM.

Conclusions of the preliminary study

Apparently, the length and probably also the temporal resolution of the time series of isotopic discharge composition have an considerable effect on the outcome of convolution model based transit time modeling. The comparison of two different model types reveal the high uncertainty of their results in respect to TTDs and MTTs, even though the performance of both model types might be considered acceptable for most of the modeled catchments.
Facing the gained results and their uncertainties, the limits of the convolution model approach with static transfer functions based on stable water isotope data become apparent. For a more accurate determination of MTTs and TTDs' tailings, the information content of stable water isotope data is insufficient and the inclusion of a further tracer with extended temporal scope (e.g. 3H) might be favorable (McDonnell et al. ,1999; McDonnell et al.,2010} . For a more appropriate consideration of a catchments short term behavior the assumption of static transit times has to be dropped. A more process based modeling approach which allows for dynamic transit time distributions (e.g. Hrachowitz et al., 2013) seems most promising and is currently being implemented. 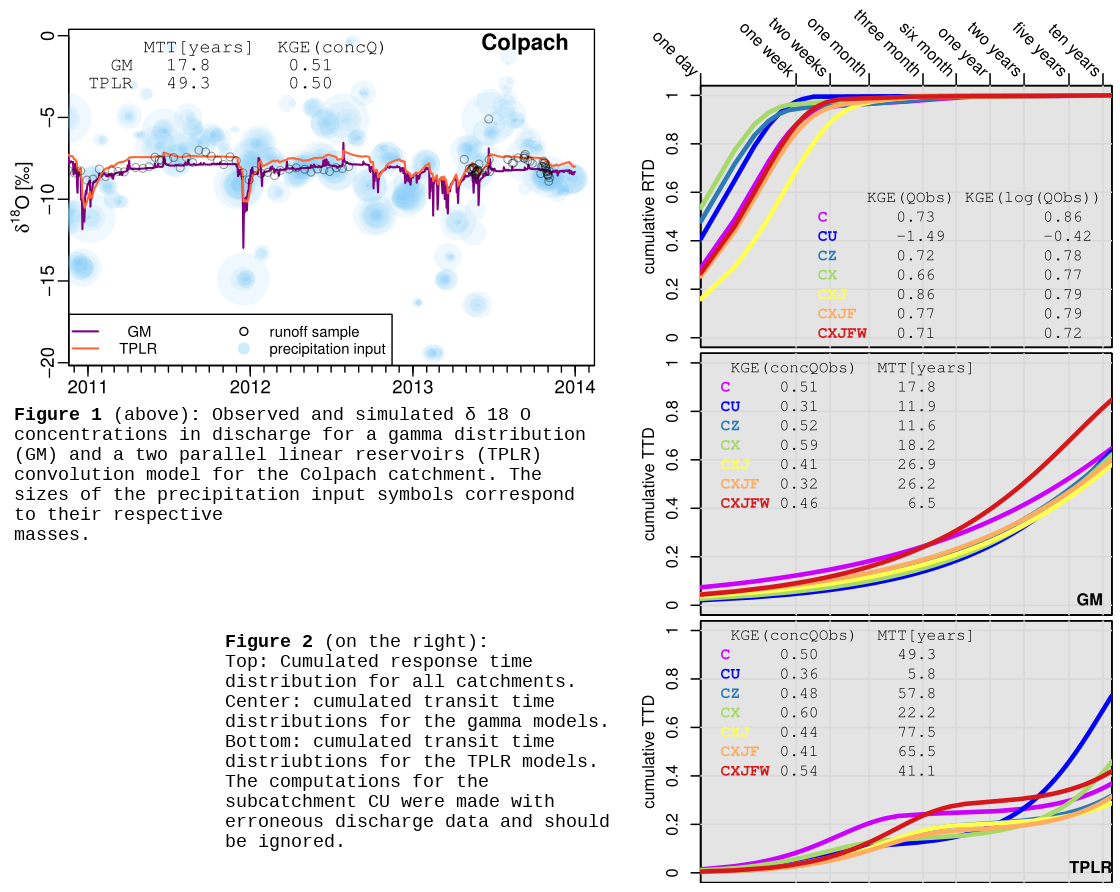