Concentrations of dissolved organic carbon (DOC) in stream water have been increasing across Northern Europe (Monteith et al. 2007) and in other parts of the world posing problems for the ecological health of aquatic systems and drinking water production from surface water. Elevated loads of DOC in reservoirs increase the costs for drinking water production and may result in the formation of toxic by-products during chlorination of the raw water. Understanding the dynamics and mechanisms of DOC export from catchments is an important prerequisite for a mitigation of these problems. Developing robust quantitative models that can replicate observed current dynamics or even predict future trends is challenging as catchments are complex systems that integrate a large number of hydrologic and biogeochemical processes to generate an integral solute flux signal at the catchment outlet. Physically based numerical process models that try to represent all possible processes and simulate the system bottom-up are often unwieldy and difficult to parameterize. Simpler conceptual models are typically based on a set of assumptions about the functioning of the system that are often not grounded in the reality or complexity of a specific site and which can constrain our ability to understand the system. New sensing technologies that provide highly resolved data sets (in time and space) can open a complimentary window to look at the system in a data-driven top-down approach.

Mechanistic understanding of catchment hydrology is not only a prerequisite for better predictions of hydrologic fluxes but also for an improved assessment of solute and matter fluxes and associated water quality trends. For a long time investigations of catchment water chemistry have been characterized by a mismatch in the measurement time scales for the hydrologic variables (e.g. discharge, precipitation, groundwater heads) and the water chemistry variables (e.g. solute concentrations). However, this has been changing with the development of new and improved online sensing technologies for water chemistry and may transform our ability to characterize and understand catchment processes (Kirchner et al. 2004). UV-Vis spectrophotometers, for example, can provide high frequency concentration measurements for a range of solutes (e.g. NO3, DOC) and over longer periods of time (Jollymore et al. 2012, Strohmeier et al. 2013). Joint analysis of these hydrochemical time series with time series of standard hydrometric data allows unprecedented insights into the links between catchment hydrology and chemical signatures in the stream water (Kirchner et al. 2004). The relationship between discharge (Q) and DOC concentrations in catchment outflow during events often displays a distinct clockwise (Jeong et al. 2012) or counter-clockwise hysteretic behavior (Strohmeier et al. 2013), which is the result of specific mobilization and transport pathways in the catchment. We argue that these distinct Q-DOC relationships can be used to identify the dominant hydrologic dynamics and flowpaths that control catchment-scale DOC export. Time series of DOC concentrations and hydrometric data from three small to meso-scale catchments is used to illustrate how highly resolved concentration and discharge time series can help to decipher complex DOC export dynamics and challenge and/or support hydrologic process representations and assumptions in conceptual and process-based numerical models for the catchments.

Highly resolved measurement of hydrometric data and instream DOC concentrations at the catchment outlet and at other instream locations were conducted to assess DOC export dynamics and their hydrologic controls within three catchments in Germany. The small, forested, bowl-shaped Lehstenbach catchment (4.2 km2) is located in Southeast Germany and is characterized by extensive peat-forming riparian wetlands. The larger Rappbode (44.0 km2) and Hassel (44.1 km2) catchments are characterized by mixed landuse with a larger fraction of agriculture in the Hassel catchment and display significantly more spatial differentiation in landuse and topography than the Lehstenbach catchment. DOC concentration time series are obtained from UV-Vis photospectrometers (Jollymore et al. 2012), which scan over a range of wave lengths and hence can be used to additionally quantify concentrations of other solutes (e.g. total dissolved carbon TOC, nitrate). The measured spectra can also be analyzed to infer differences in DOC composition to possibly fingerprint DOC mobilization zones in the catchment. The field data from the Lehstenbach catchment is complemented by numerical modeling experiments to characterize and quantify runoff generation processes based on existing local and catchment-scale process models (Frei et al. 2010, Frei & Fleckenstein 2014, Partington et al. 2013). Additionally a conceptual model of catchment hydrology is used to interpret to the field data from the Lehstenbach.

All three catchments show pronounced hysteretic relationships between DOC and Q. However, whereas the hysteretic DOC-Q relationship in the Lehstenbach is consistently counter-clockwise, Hassel and Rappbode show clockwise hysteresis most of the times with some local events that display a mild counter-clockwise hysteresis. We attribute this more differentiated DOC response of the larger two catchments to the more complex topography and landuse patterns, which cause more diverse source patterns and transport flowpaths. The Lehstenbach catchment on the other hand displays very consistent DOC-Q relationships, which for all events in a given season have almost identical recessions (Figure 1).

Concentration levels in the summer are generally higher than in the winter. The concentration levels at the onset of and during the rising limb of individual events are quite different and seem to depend on the antecedent hydrologic conditions. Discharge at the catchment outlet is strongly correlated with the dynamics of the groundwater levels in the riparian wetlands suggesting that rapid groundwater response to precipitation controls runoff generation in the Lehstenbach catchment. This interpretation of the data is consistent with process based numerical models of local and catchment-scale runoff generation processes (Frei et al. 2010, Partington et al. 2013). Groundwater level fluctuations in the peat-forming riparian wetlands also provide an explanation for the different concentration levels in the rising limbs of the event hydrographs. The peat soils in these zones represent large stores of organic material in the system and generally show declining DOC pore water concentrations with depth due to higher degrees of peat degradation at depth. Hence rising groundwater levels mobilize water from soil zones with increasing availability of DOC. Presumably the efficiency of lateral drainage in the peat also increases with rising groundwater levels because of the typically lower degree of compaction of the organic material in the upper peat layers and the resulting higher lateral hydraulic conductivities. Similar conditions and effects have also been described for riparian zones in Scandinavia (Seibert et al. 2009). Modeling experiments from the Lehstenbach catchment further suggest that under very wet conditions shallow surface flows, which are modulated by surface micro-topography, can cause rapid, threshold controlled increases in lateral drainage efficiency (Frei et al. 2010, Frei & Fleckenstein 2014). This can provide an additional mechanistic explanation for the observed DOC-Q relationships. A simple conceptual model of catchment hydrology (based on the HBV code) together with a linear end-member mixing model could not adequately replicate the observed hysteretic relationships between DOC and Q. In the larger, more complex Rappbode and Hassel catchments, we locally observed similar counter-clockwise hysteresis in upstream stream reaches with extended riparian wetlands, which we attribute to similar mechanisms. However, at the catchment outlet, where chemical stream signatures integrate more diverse source areas and flow paths, DOC-Q relationships were found to be hysteretic in clockwise direction and less consistent. This suggests other, additional mobilization mechanisms and pathways that create different DOC responses, which increasingly superimpose the DOC signatures received from further upstream.

Combining highly resolved concentrations measurements for DOC in stream flow with standard hydrometric data at the same temporal resolution and explorative numerical modeling allowed to identify emerging patterns in the DOC-Q relationship that are indicative of dominant hydrologic flow processes, which control the mobilization and subsequent export of DOC from the investigated catchments. The hydrologic process dynamics inferred from the field data from the Lehstenbach catchment are consistent with process based numerical models of the local and catchment-scale hydrology. In contrast, DOC export estimates based on simpler conceptual hydrologic models at the catchment scale failed to adequately represent the observed DOC-Q relationships. Based on our analyses the riparian wetlands in the Lehstenbach catchment, which only occupy 1/3 of the entire catchment area, could be identified as the dominant functional zones controlling event runoff and DOC export from the catchment. For larger catchments the observed relationships are more variable in space and time and less consistent as they integrate a larger range of processes and transit times, which also makes them more challenging to interpret.

Jollymore A., Johnson M.S., Hawthorne I,(2012) Submersible UV-Vis Spectroscopy for Quantifying Streamwater Organic Carbon Dynamics: Implementation and Challenges before and after Forest Harvest in a Headwater Stream, Sensors, 12(4): 3798-3813 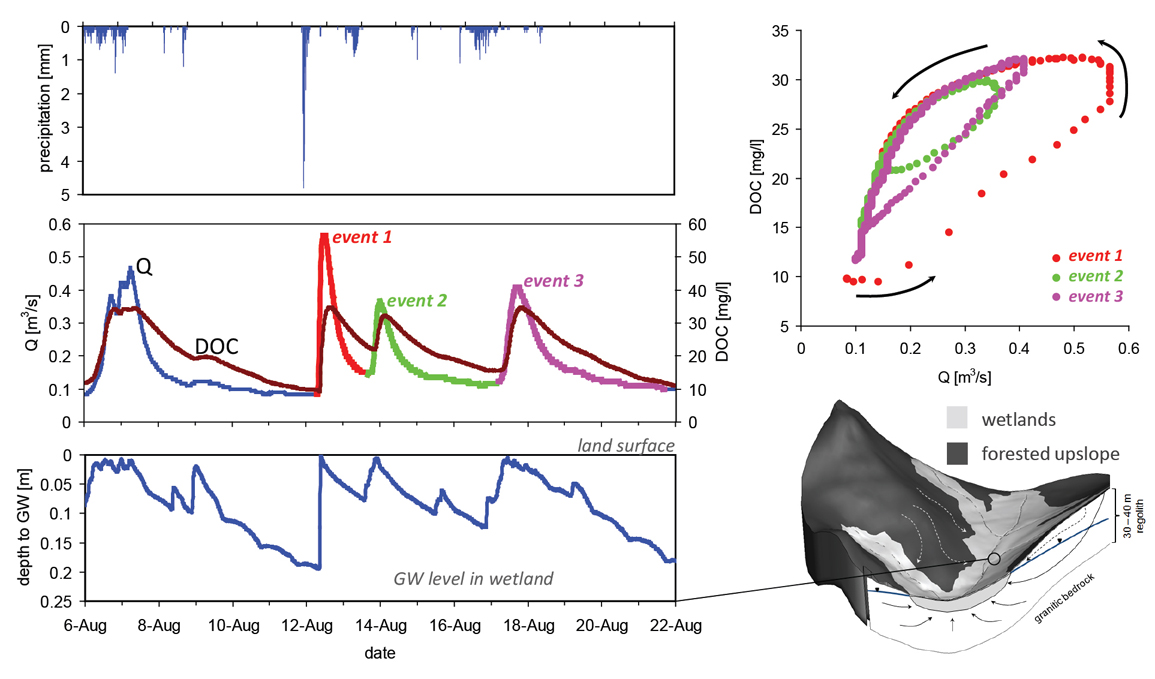