Thermodynamics, Limits, and Optimality of Land Surface-Atmosphere Exchange and Evapotranspiration

Thermodynamics has long intrigued and inspired scientists. Its two laws constitute some of the most fundamental physics that set the direction and constraints on how processes convert various forms of energy. These conversions, obviously, also apply to land surface-atmosphere exchange. It particularly applies to evapotranspiration, which involves large amounts of latent energy that is derived from the absorption of solar radiation at the surface. Hence, thermodynamics should tell us something about the direction, the magnitude and the relevant constraints that shape the rate of evapotranspiration from the land surface into the atmosphere.

Recently, several optimality approaches have been formulated in thermodynamic terms, such as maximum power, maximum dissipation, and more generally, the proposed principle of Maximum Entropy Production (MEP, Ozawa et al. 2003, Kleidon et al. 2010). Their application have shown some rather promising successes in determining the magnitude of complex Earth system processes in a relatively simple way, for instance relating to the magnitude of atmospheric heat transport. The combination of a thermodynamic foundation with a simple model is quite contrary to the dominant approach to use empirical parameterizations and to make models increasingly more complex. Yet the concrete importance of thermodynamics for understanding and predicting hydrologic fluxes is still not entirely clear. Thermodynamically-based optimality principles have been met with certain level of skepticism (Volk and Pauluis, 2010) as their foundation as well as the mechanisms by which optimality should be achieved are not entirely understood.

In this contribution we clarify the application of thermodynamics to land surface-atmosphere exchange as well as evapotranspiration and demonstrate the utility of this approach with several examples. To apply thermodynamics, we first view the land-surface atmosphere system as a thermodynamic system that is driven by radiative heating and cooling and which exchanges mass by turbulent exchange (Kleidon and Renner, 2013a). To maintain turbulent exchange requires a continuous generation of atmospheric motion, which is where thermodynamics comes in. Atmospheric motion can be seen as the result of an atmospheric heat engine that is driven by surface heating and that converts a fraction of the radiative heating into kinetic energy. Both laws of thermodynamics set a limit to the magnitude by which motion is generated. The first law of thermodynamics constrains this generation rate by balancing the power with the heating and cooling terms of the energy balances. The second law involves the entropy of the system, a physical measure for the dispersal of energy at the molecular scale. It requires that during this conversion process, entropy stays constant or is increased, which sets a limit to the generation rate. When combined, the two laws yield the very well established Carnot limit of a heat engine. When applied to the context of the land-surface atmosphere system, we also need to account for the fact that the driving temperature difference between the surface and the atmosphere does not stay fixed, but reacts to the convective heat flux generated by the engine. The more heat is transported as a result of the heat engine, the more depleted the temperature difference, resulting in a limit of maximum power. This maximum power limit corresponds to the strongest generation of convective motion. As power equals dissipation in steady state, and dissipation takes place mostly due to turbulent friction near the surface, this state also corresponds to a state of strongest turbulent mixing at the surface. This maximum power limit results in expressions that are almost identical to the proposed MEP principle applied to mass exchange, yet its formulation as a limit to generating motion makes its application and interpretation much clearer. A substantial problem in applying MEP to a system is that all types of processes produce entropy, so that it is unclear to which process it should be applied to. In the context of the surface energy balance, radiative exchange, the ground heat flux as well as the turbulent fluxes of sensible and latent heat all produce entropy, and the application of MEP to each one of these processes would yield a different outcome. The use of the maximum power limit moves beyond this ambiguity as it involves a physical interpretation of the processes. As heating of the ground yields buoyancy and thus mechanical power to generate convection, we apply the maximum power limit to convective mass exchange and distinguish between its application to dry and moist convection. As thermodynamic limits are firmly established and confirmed, the maximum power limit as a thermodynamic limit for convection by itself should be without dispute, but then it also does not imply that convection necessarily operates at this limit. A relevant thermodynamic hypothesis now relates to the question whether Earth system processes evolve towards and operate near their thermodynamic limits, with the associated exchange fluxes being optimal in that they yield maximum power. This hypothesis is closely related to identifying the relevant feedback processes of the involved dynamics that would yield the maximum power limit as an outcome. As it turns out, the maximization of power is the outcome of two fundamental feedback processes, a fast, positive feedback that amplifies the power by an increase of the convective heat flux, and a slow, negative feedback that relates to the depletion of the thermodynamic driving force by the convective heat flux (Kleidon et al. 2014a).

To apply and demonstrate this thermodynamic approach to land surface-atmosphere exchange, we use a holistic view of the surface energy balance that includes the sequence and tight coupling of processes, from the absorption of solar radiation, net exchange of terrestrial radiation, convective mass exchange, to evapotranspiration (Kleidon et al., 2014b; Figure 1 a). This setup is quantitatively described by a steady-state formulation of the surface energy balance together with a linearized description of net longwave radiative exchange, and a description of turbulent fluxes in terms of convective mass exchange. By applying the maximum power limit to dry convection, we obtain an analytic solution of the partitioning of the surface energy balance. It results in an equal partitioning of the absorbed solar radiation into net longwave radiation and turbulent fluxes. The resulting expression for evapotranspiration is almost identical to the well-known equilibrium evaporation concept of Slayter and McIlroy (1961). When this approach is applied to the ECMWF climate reanalysis dataset, we find that despite of the extremely simple approach, the predicted partitioning compares well in the climatological mean (Figure b and c). This approach also predicts the response of evapotranspiration to surface warming very well when compared to climate model simulations (Kleidon and Renner, 2013b).

These applications serve as a proof of concept that this thermodynamically-constrained approach provides a great value to quantify land surface-atmosphere exchange as extremely little information is needed for a robust and internally consistent estimate of land surface energy balance partitioning and its sensitivity to change. Our approach explicitly goes beyond estimating exchange fluxes from apparent atmospheric control, like wind speed and air humidity, which are inherent in currently used semi-empirical parameterizations. Instead, it acknowledges that these are not independent variables, but result from the generation of motion and its turbulent dissipation, and that absorption of solar radiation is by far the most dominant forcing of land surface-atmosphere exchange. We close with an outline of how this approach can be further extended to scale up land surface heterogeneity to obtain robust estimates of land surface-atmosphere exchange and evapotranspiration at the catchment scale.

A Kleidon, M Renner (2013b) A simple explanation for the sensitivity of the hydrologic cycle to surface temperature and solar radiation and its implications for global climate change, Earth Syst. Dynam., 4, 455-465.

A Kleidon, Y Malhi, and PM Cox (2010). Maximum entropy production in environmental and ecological systems, Philosophical Transactions of the Royal Society B, 365, 1297-1302.

Figure Caption: (a) A schematic diagramme of the surface-atmosphere system which is driven by surface heating by the absorption of solar radiation at the surface (Rs) and atmospheric cooling by the emission of terrestrial radiation to space. (b) Absorbed solar radiation estimated by remote sensing versus turbulent fluxes predicted by maximum convective power (red line) and the turbulent fluxes of the ECMWF dataset (dots, colored by latitudinal bands). (c) Estimates of evapotranspiration of the ECMWF reanalysis dataset and based on the maximum convective power approach. 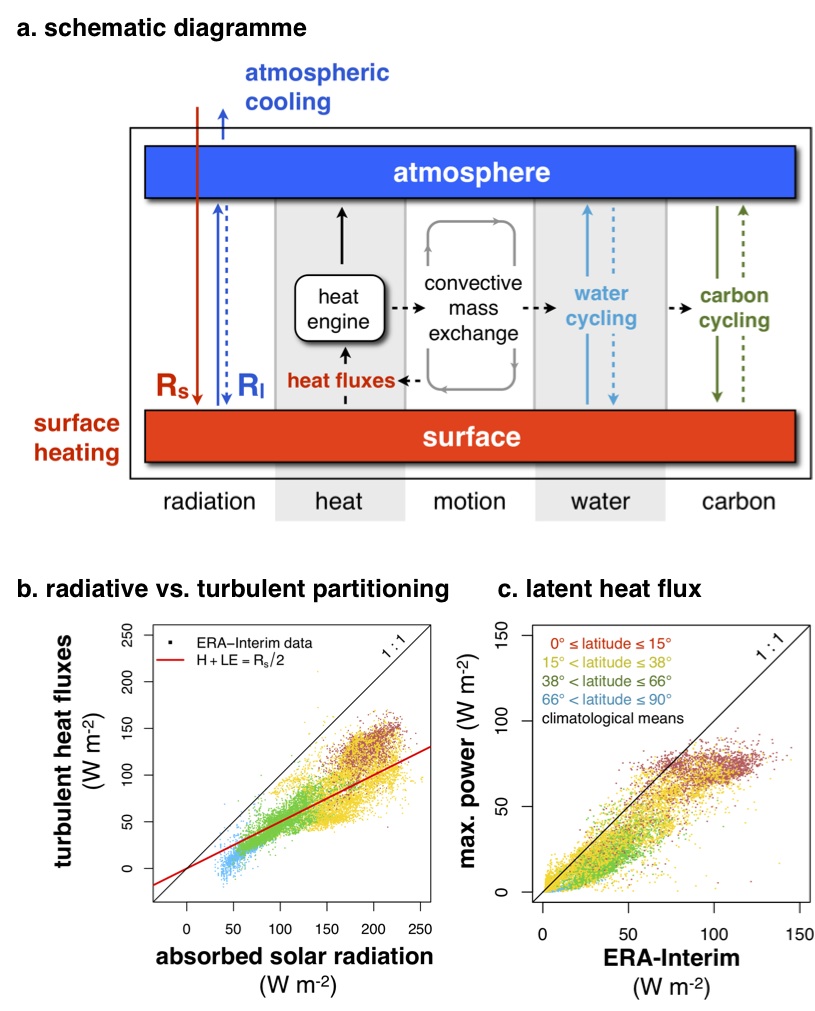