In the context of catchment hydrology, the term 'interflow' describes the portion of event water flowing in the subsurface that contributes to the immediate river discharge response. The underlying processes are unspecified and manifold, and often subsumed under abstract generalizations for model implementation. These generalizations include pipe flow concepts or horizons of preferential flow, which are often used to model discharge response but do not represent internal processes. Using the example of a hillslope with periglacial slope deposits, a quite common characteristic of hillslopes in headwater catchments, we investigated the importance of lateral flow and the occurrence of preferential flow paths. Sprinkling experiments on various scales are often used to investigate hillslope flow processes. In this study we combined a dense network of soil moisture profiles and ground penetrating radar (GPR) measurements. With this approach, the quantitative information on soil moisture changes at the point-scale with only limited spatial coverage is supported by information on spatial patterns. This approach was used to evaluate the informative value of point measurements and the correctness of simplified concepts and to identify the necessary observation scales.

The experimental site is located in the catchment of a small tributary of the Colpich river which is part of the Attert basin in Luxembourg. Narrow valleys with steep forested slopes and shallow soils on the one hand and agriculturally used plateaus on the other hand form the characteristic landscape of the catchment. The shallow top soil (< 1m) overlays a periglacial deposit layer of weathered and horizontally oriented schist debris of variable thickness and structure. The schist bedrock below is strongly inclined with almost vertical foliation. It is hypothesized that this typical architecture plays a major role for flow processes in the soil. To investigate the importance of lateral subsurface flow in such soils, especially with regard to preferential flow paths, a sprinkling experiment was conducted at the lower part of a hillslope.

The investigated hillslope section is about 250 m² large and has a topographic gradient of approximately 14°. Four circular irrigation sprinklers were arranged in a 5 by 5 m square in the upper part of the hillslope section. The 25 m² area spanned by the sprinklers was the core area with relative homogeneous sprinkling intensity. A rain shield separated the lower boundary of the core area to create a sharp transition to the non-irrgated area below (see sprinkling site in Figure 1A). Due to the sprinkler setup there was a buffer of 4 m on the other sides of the core area with less intense sprinkling, mitigating boundary effects and resulting in an overall sprinkled area of approximately 120 m². Sprinkling intensity on the core area was 120 mm in 4:34 h.

Measurements and instrumentation included one tipping bucket and 42 mini rain collectors which were evenly distributed over the core area to monitor temporal and spatial variations of the sprinkling intensity. A surface runoff collector was installed, covering one half of the lower boundary of the core area. The collector furrow was connected to a tipping bucket to monitor the temporal dynamics of surface runoff. Soil moisture profile measurements were accomplished with 16 access tubes that were installed several weeks in advance to ensure good ground coupling (see sprinkling site in Figure 1A). The tubes covered depths between 0 to 70 cm and 0 to 170 cm. Measurements were taken manually at 10 cm depth increments. Time-lapse GPR measurements were conducted along transects parallel to the rain shield at distances of 0.5 m, 1 m, 2.5 m and 5 m downslope of the sprinkling area. The observed changes in resistivity over time are used to deduce changes in water content, revealing a two-dimensional map of flow paths down to a depth of approximately 4 m. Information on the subsurface was collected from core samples and a GPR survey prior to the experiment.

Based on the observed soil moisture dynamics in the profiles on the core area, three different layers were identified: The soil moisture response in the top 50 cm of the soil (layer I) was very fast in all profiles on the core area, while layers below (layer II and III) reacted with a time lag of up to 3 h. The increase in soil moisture in this layer was between 8 to 10%. Layer II ranges from 50 to 90 cm depth and exhibited a weaker signal compared to layer I, with an increase in soil moisture of about 4%. Layer III starts in approximately 90 cm depth and extends below the length of the access tubes for soil moisture measurements. At this depth soil moisture started to increase almost simultaneously with the overlying layer II and exceeded layer II in signal strength with an increase of 7 to 10%.

A 1D mass balance over the entire observed depth from 0 to 150 cm of four soil moisture profiles on the core area shows that the recovery of input mass exceeded 100% during the first 60 min of sprinkling. The storage then decreased and recovery rates dropped to approximately 100% and further decreased after 80 min of sprinkling. After 244 min 23.8% of the water input was lost from the core area soil profiles, and 12 min after the end of the sprinkling period the loss was 44.6% which equals 73.3 mm or 1.83 m³, based on the core area input only.

The lost water from the core area was partially found in the soil profiles below the core area shortly after sprinkling start, with very heterogeneous response at different locations. The soil moisture profiles T4, T5 and T6 (Figure 1A) showed no significant response. Three profiles T3, T9 and T10 were located directly below the core area (0.1 to 0.4 m downslope of the rain shield) and showed response patterns similar to those observed at the core area, but slightly delayed and with an even stronger signal in the deepest layer below 100 cm. Two soil moisture profiles in the distance of 1.0 and 1.5 m from the rain shield (T11 and T12) still showed quite a strong soil moisture increase in the uppermost layer I (0 - 50 cm), with a time lag of less than 1.5 h after sprinkling start. The signals in the deeper layers were strongly dampened and delayed, with maxima of up to 4% increase occurring 3 to 5 h after sprinkling start.

To test the suitability of GPR to detect soil moisture changes the data of two soil moisture profiles was compared to a 1 m wide section of the closest GPR transect. The GPR data above 40 cm depth is not reliable and has to be discarded, resulting in a depth overlap from 40 cm to maximum depth of the soil moisture profile. GPR resistivity changes are only a proxy for water content, thus a quantitative interpretation might not be appropriate, but direct comparison shows that the observed patterns match very well (Figure 1B and C). The two-dimensional GPR data reveals the spatial extent of the flow paths and shows distinct responsive zones that were sharply delineated. These zones were arranged along certain layers which concur with the layers identified by soil moisture measurements, but covered only a small portion of the cross sectional area. In average, the highest response was found in the depth between 1 and 2.5 m (Figure 1C).

The observations from the sprinkling experiment show that fast lateral flow plays a major role in structured soils. A large portion of the water does not enter the bedrock. It drains along lateral flow paths, with the structure of the periglacial slope deposits determining the spatial pattern of subsurface flow paths. The soil moisture signal of the natural event with an input of 44 mm on the entire hillslope was much stronger than the signal we could generate with an extremely high sprinkling intensity on a small hillslope section. The strong signal of the natural rainfall event is likely linked to subsurface flow contributed from the upslope area (above the experimental plot) and emphasizes the importance of lateral flow.

The size of the investigated hillslope section, sprinkling duration and intensity did not represent natural conditions, but were chosen to ensure a complete activation of all potential flow paths in the soil on an area that was small enough to be monitored thoroughly. This setup was adequate to identify links between structures and processes, and it was also adequate to get an idea about response patterns and times and the spatial architecture of preferential flow path network. As shown by the measured response to the natural event preceding the sprinkling experiment, the actual quantification of these processes requires an adaption of the experimental scale to match the process scale. 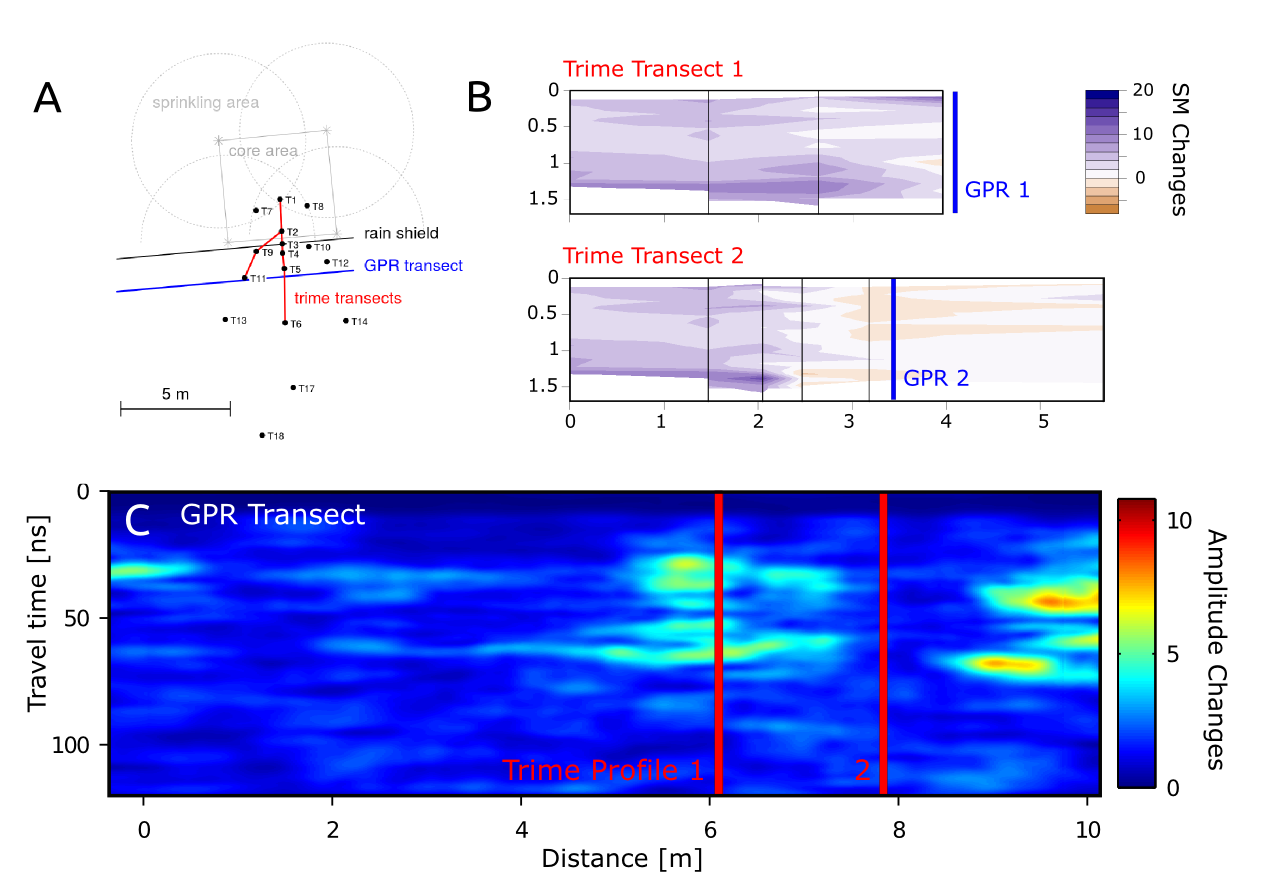