The lower crustal section in Oman ophiolite includes ‘black gabbros’ that have escaped the common medium-low temperature hydrous alteration. Their plagioclases are totally fresh, but contain in their mass, nebulous inclusions most times below the resolution of optical microscope, or expressed as solid silicate phases clinopyroxene and pargasitic amphibole, up to 10 µm sized, having T equilibrium above 900°C with their host plagioclase. These gabbros have a well-expressed magmatic foliation, relayed by plastic strain marked by stretched olivine crystals, and pinching twins in plagioclase.

In addition to major elements analyses, the crystallographic relationships of these Mg silicate inclusions to their host plagioclase are explored by Electron Back Scattering Diffraction (EBSD) processing.

- Diopsidic clinopyroxene inclusions are dominant over pargasitic amphibole that tend to locate close to the margins of host plagioclase (Fig 1). Some inclusions are mixed clinopyroxene-amphibole, separated by a non-indexed phase that could represent a pyribole-type structure, suggesting transformation from clinopyroxene to amphibole during cooling. High chlorine content in the amphibole sign the seawater contamination at least during the development of this phase.

- Preliminary statistical pole figures (Fig. 2) in the six joined plagioclase grains studied, show that both plagioclase and diopside inclusions have a strong crystal preferred orientation (CPO) connected such that the strong [010]pl maximum coincide with the strong [100]di. In addition, a coincidence appears between three sub-maxima of [100]pl and [001]di. These interesting relationships are refined. It is inferred that clinopyroxene developed through corrosion of the plagioclase by a Mg-bearing hydrous fluid, penetrating possibly via twin interface and diffusing at T~1100°C, upper limit of clinopyroxene stability in hydrous conditions. Development of pargasite implies increasing hydration during cooling. 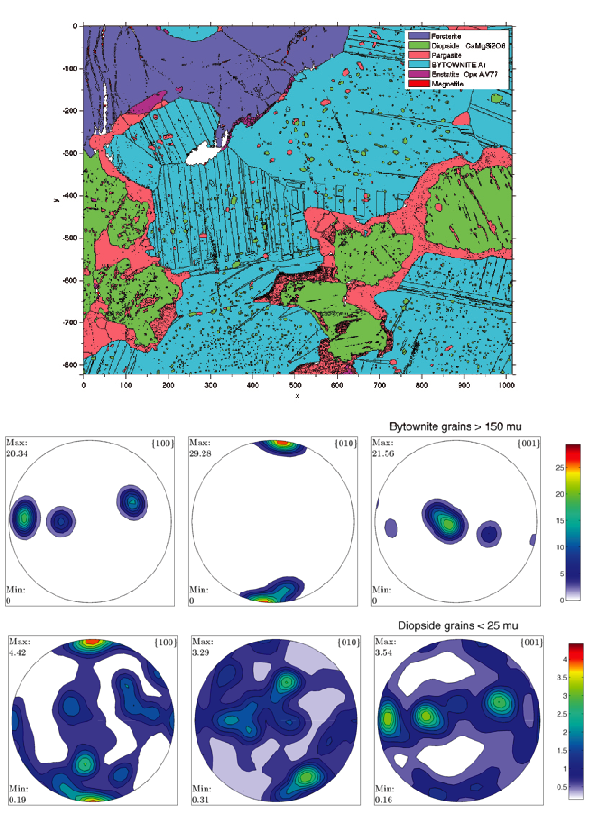