Several climate modelling studies in the past have used reduction in solar constant to simulate the climatic effects of Solar Radiation Management (SRM) geoengineering. This is most likely valid only for space-based mirrors/reflectors but not for SRM methods that rely on stratospheric aerosols. In this study, we use a climate model to evaluate the differences in climate response to SRM by uniform solar constant reduction and stratospheric aerosols. The experiments are designed such that global mean warming from a doubling of atmospheric CO2 concentration (2xCO2) is nearly cancelled in each case. In such a scenario, the residual climate effects are similar when important surface and tropospheric climate variables such as temperature and precipitation are considered. However, there are significant differences in stratospheric temperature response and diffuse and direct radiation reaching the surface. A difference of 1K in the global mean stratospheric (61-9.8 hPa) temperature is simulated between the two SRM methods, with warming in the aerosol scheme and a slight cooling for sunshades.

While the global mean surface diffuse radiation increases by ~23% and direct radiation decreases by about 9% in the case of aerosol SRM method, both direct and diffuse radiation decrease by similar fractional amounts (~1.0%) when solar constant is reduced. When CO2 fertilization effects from elevated CO2 concentration levels are removed, the contribution from shaded leaves to gross primary productivity (GPP) increases by 1.8 % in aerosol SRM because of increased diffuse light. However, this increase is almost offset by a 15.2% decline in sunlit contribution due to reduced direct light. Overall both the SRM simulations show similar decrease in GPP (~ 8%) and NPP (~3%) relative to 2xCO2, indicating the negligible effect of the fractional changes in direct/diffuse radiation on the overall plant productivity. Based on our modelling study, we conclude that the climate states produced by a reduction in solar constant and addition of aerosols into the stratosphere can be considered almost similar except for two important aspects: stratospheric temperature change and the partitioning of direct versus diffuse radiation reaching the surface. 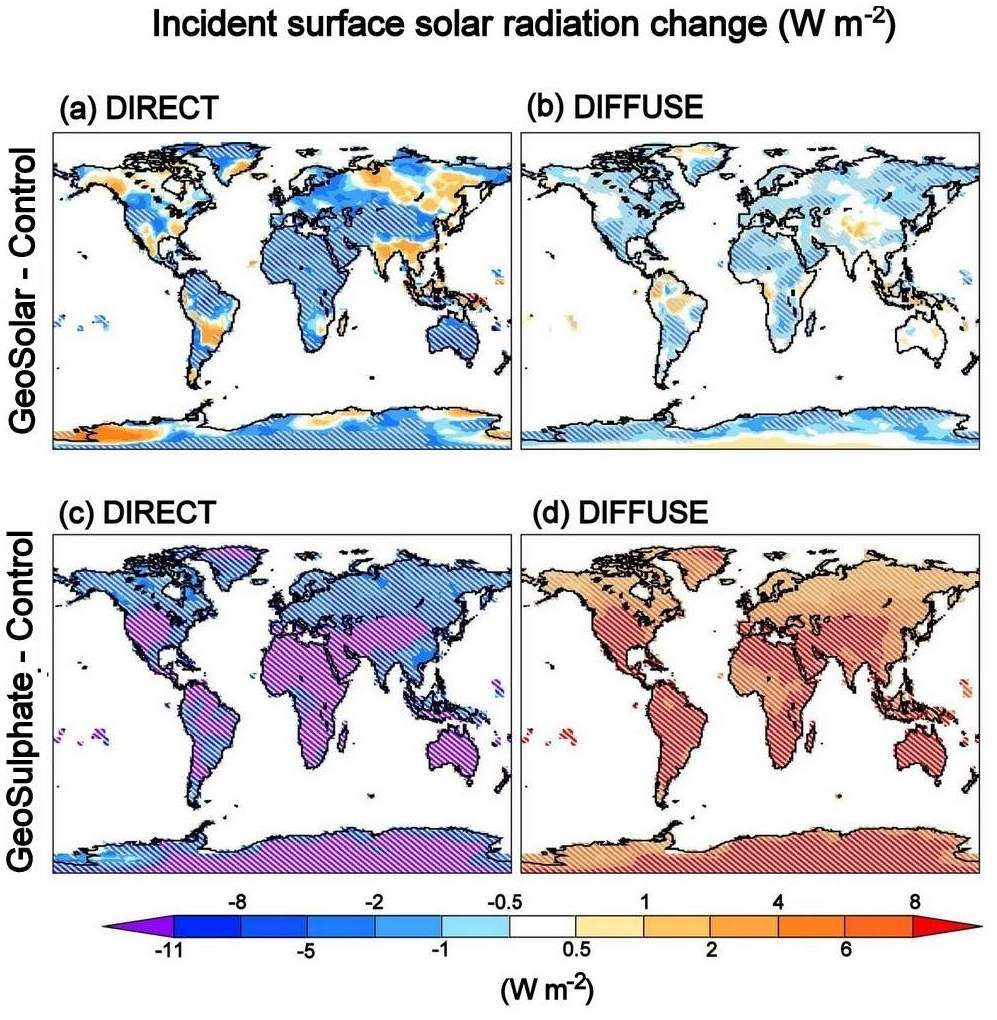