A new concept for in situgroundwater remediation was recently developed where drilled horizontal wells filled with granular treatment media are installed in the direction of groundwater flow. Due to the differences in hydraulic conductivity (K) of the media in the well and the surrounding aquifer, groundwater is “focused” into the well and treated (Figure 1).

We have built a physical model to replicate a horizontal well in a confined aquifer. The model is constructed inside a 55-gallon drum packed with sand and water is pumped into the bottom of the drum and flows upward through the system. Within the aquifer, we installed a 1” screened well packed with lime-soda beads. To define the capture zone, we placed manometers in the aquifer. Finally, a constant head is applied to the system (Figure 2 and 3).

Initial tests have shown that the 1” well with a hydraulic conductivity 65 times greater than the surrounding aquifer (kwell= 1.3 cm/sec vs. kaquifer= 0.02cm/sec) will capture a significant percentage (over 80% in some configurations) of the water applied to the system. A tracer test has shown that the water velocity in the well is substantially higher than the aquifer. Manometer readings confirm the flowfield effects of the well and these data are being used to calibrate numerical models.

The presentation will focus on the observed behavior of the physical model under varying applied head and hydraulic conductivities and discuss the potential design implications for full-scale application. 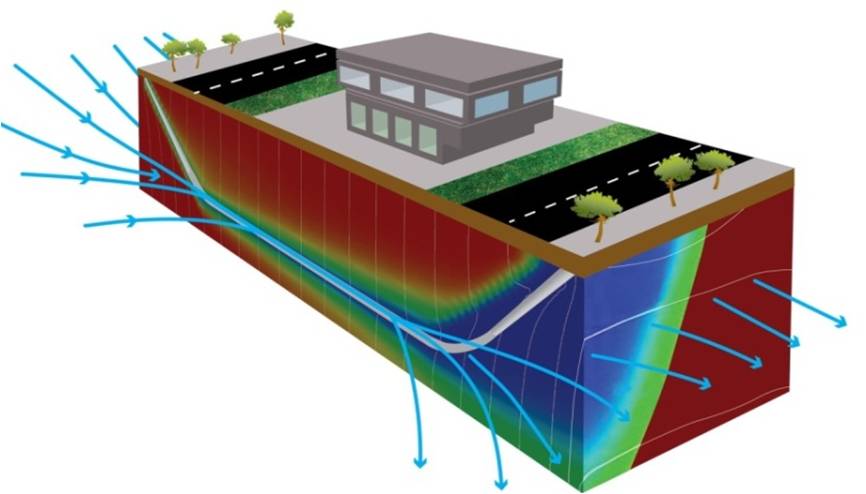