Evaporation from the Arctic Ocean has implications for cloud and water vapor feedbacks, Arctic amplification, and ablation of sea ice. Accurately estimating the evaporation continues to be associated with large uncertainties leading to latent heat differences of up to 55 Wm-2 in the Beaufort-East Siberian Seas (BESS) region between models. To help constrain this uncertainty we compare data from the Atmospheric Infrared Sounder (AIRS) and ECMWF’s ERA-Interim reanalysis with a variety of in situ data. When comparing input data, ERA-Interim skin temperatures had twice as large an error compared to AIRS, but had smaller errors in air specific humidity. Differences in the input data into the same model can cause moisture flux estimates to differ by as much as 1.6 x10-2 gm-2s-1 (equivalent to 40 W m-2 latent heat) in the BESS region. Moisture flux products from the BMF13 and the ERA-Interim scheme are also compared. Similarities in these products were seen in the Kara/Barents Seas having a ratio of 1:1, and differences were seen in the BESS region, having a ratio of roughly 5:1. Issues found between ERA-Interim and AIRS support the need for more in situ measurements of temperature and humidity in the BESS region to improve the quality of the input data and thus reduce model uncertainties. We also show regional changes in the moisture flux produced between 2003-2014 and try to explain if the majority of the water vapor in the lower atmosphere is from evaporation at the surface rather than from lower-latitude transport. 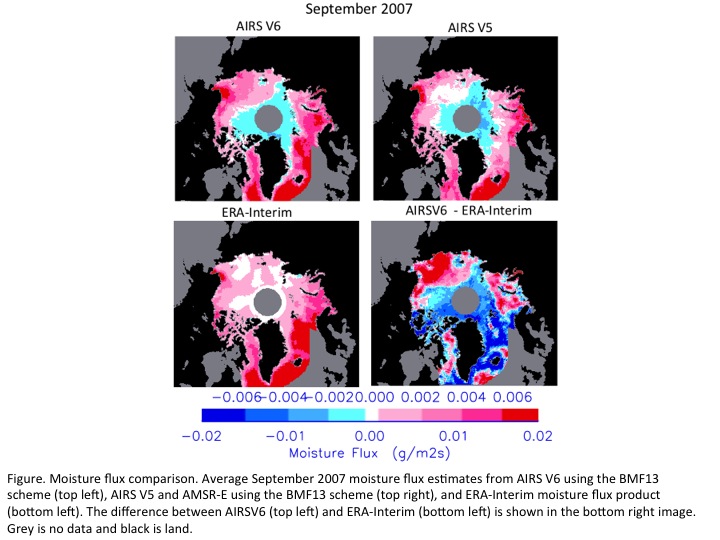