Ordos, as expected for a craton, has a much thicker lithosphere (~200 km) than ENCC (~80 km), and traditional receiver functions (RF) suggested average crustal thickness of ~40 km beneath Ordos, albeit 10 km thicker than the ~30km beneath the ENCC. In contrast, VDSS applied to an E-W linear Peking University seismic array across middle Ordos (latitude 37.5°N) found the Moho much deeper at ~60 km (Yu et al., EPSL, 2012). To better understand the lithospheric structure of Ordos, we applied VDSS to two E-W linear Chinese Academy of Sciences arrays across north (39.5°N) and south (36°N) Ordos. We applied wave mode-separation and deconvolution techniques that significantly removed the influence of the source wavelet and improved the resolution in VDSS. We show that beneath the southern array the Moho (from VDSS) is generally flat within Ordos at ~51 km, but rapidly shallows eastward to ~28 km from 110.5°E to 112.5°E, very similar to the Moho shape of the middle profile. The rapid change in Moho depth on the two profiles may be due to the influence of the Shanxi Graben from 36°N to 37.5°N. Beneath the northern array a continuously west-dipping Moho is found from ~26 km at 112°E to ~45km at 107.5°E. Our VDSS result for both the southern and northern arrays is clearly different from the conventional RF results given by Zheng et al. (JGR, 2012), which show an almost flat Moho at ~40 km with a trough at 110.5°E beneath the northern array and a Moho gently dipping westward from ~30 km at 114°E to ~40 km at 108°E beneath the southern array.

The Moho found by RF is the interface with the largest S velocity contrast within the lithosphere, whereas the Moho found by VDSS is the boundary causing total reflection of down-going P Wave. While it is not surprising that RF and VDSS identify different interfaces in the crust-mantle transition zone, their large separation is unusual and implies a complex crust-mantle transition zone structure beneath Ordos that might shed light on the evolution of the NCC. 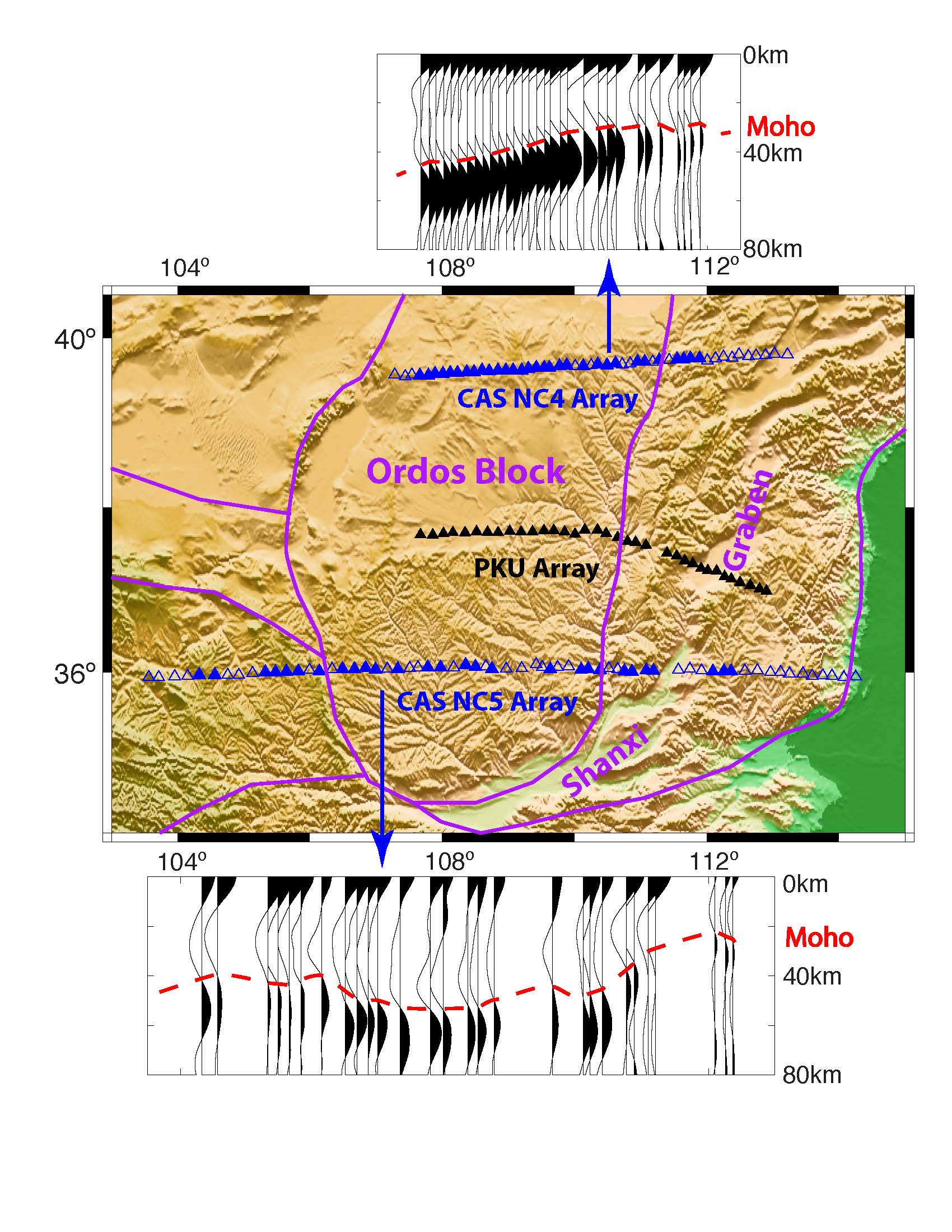