The 2010 Chilean and the 2011 Tohoku tsunami events demonstrated the tsunami's ability to penetrate much farther along rivers than the ground inundation. At the same time, while tsunami impacts to the coastal areas have been subject to countless studies, little is known about tsunami propagation in rivers. Here we examine the field data and conduct numerical simulations to gain better understanding of the tsunami impacts in rivers.
The evidence which motivated our study is comprised of water level measurements of the aforementioned tsunamis in multiple rivers in Japan, and the 2011 Tohoku and some other tsunamis in the Columbia River in the US.
When the available tsunami observations in these very different rivers are brought together, they display remarkably similar patterns not observed on the open coast. Two phenomena were discovered in the field data. First, the phase of the river tide determines the tsunami penetration distance in a very specific way common to all rivers. Tsunami wave progressively disappears on receding tide, whereas high tide greatly facilitates the tsunami intrusion, as seen in the Figure. Second, a strong near-field tsunami causes substantial and prolonged water accumulation in lower river reaches. As the 2011 tsunami intruded rivers in Japan, the water level along rivers rose 1-2 m and stayed high for many hours, with the maximum rise occurring several km from the river mouth. The rise in the water level at some upstream gaging stations even exceeded the tsunami amplitude there.
Using the numerical experiments, we attempt to identify the physics behind these effects. We will demonstrate that the nonlinear interactions among the flow components (tsunami, tide, and riverine flow) are an essential condition governing wave dynamics in tidal rivers. Understanding these interactions might explain some previous surprising observations of waves in river environments.

Figure: Measurements of the 2010/02/27 tsunami along Naruse and Yoshida rivers, Japan, showing progressive development of the tsunami wave modulation by tide. The two rivers flow together the first 0.9 km from Sendai Bay. The distance from the river mouth (rkm) is shown in the plots. Blue dots - original data sampled at 10 min; cyan - deduced tide; red - de-tided surface elevation. 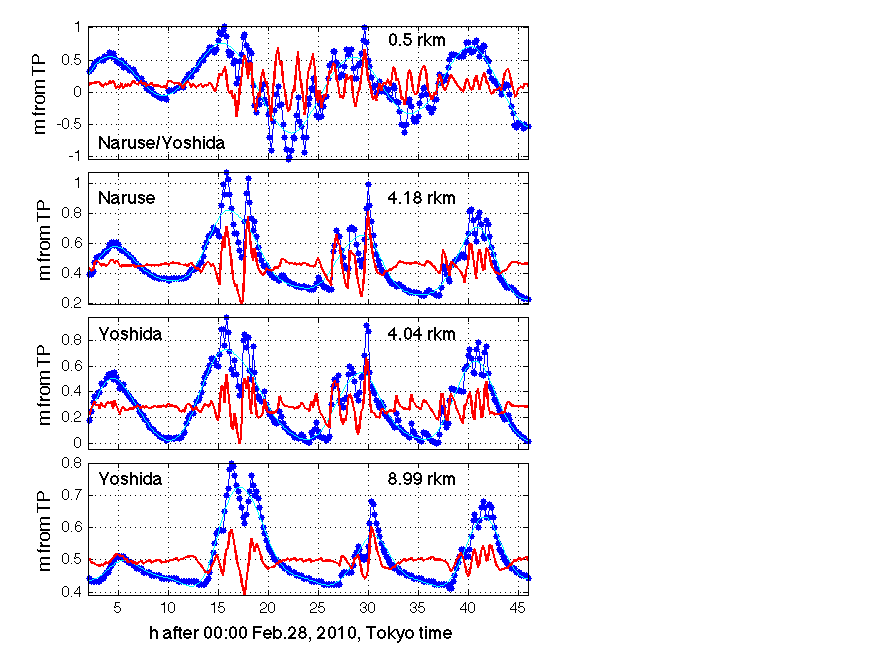