The Longitudinal Valley in Eastern Taiwan sits at the collision suture between the Eurasian and Philippine Sea plates. Based on repeated GPS campaigned measurements from 25 stations six times in 2007-2014 and 10 continuous GPS single-frequency stations recorded in 2011-2014, we characterize the surface deformation in the northernmost Longitudinal Valley where the Coastal Range of the Philippine Sea plate turns northward diving under the Eurasian plate producing two major active faults: the Milun fault and the Longitudinal Valley fault. We reconstructed a GPS velocity field and conducted strain analyses and elastic block modeling. Our results suggest a clockwise rotation at a rate of 33° M/yr and an eastward tectonic escape in the small Hualien City block (HUAL) area of ~10 × 10 km, which is apparently detached from the regional rotating RYUK block (~ 100 x 100 km) defined by previous studies. Combining the levelling data that indicated the Coastal Range is going down toward the north, we interpret the tectonic escape of the northernmost Longitudinal Valley as being initiated locally by the northwest indentation of the Coastal Range, which pushed the HUAL block to move upward and eastward. According to our strain analyses, the HUAL block shows a significant internal elastic strain inside the Milun Tableland, the hanging wall of the Milun fault. No significant deformation was observed across the surface trace of the fault, indicating that the Milun fault is now probably locked in the near surface. The deformation in the footwall of the fault was accommodated by pure-shear strain with a major NNW-compression and a minor ENE-extension. The deformation in the hanging wall is characterized by simple-shear strain with ENE-extension in its northern part and little deformation in the southern part, separated by a little known NW-trending active fault zone (Dongmingyi fault), which needs further investigation. 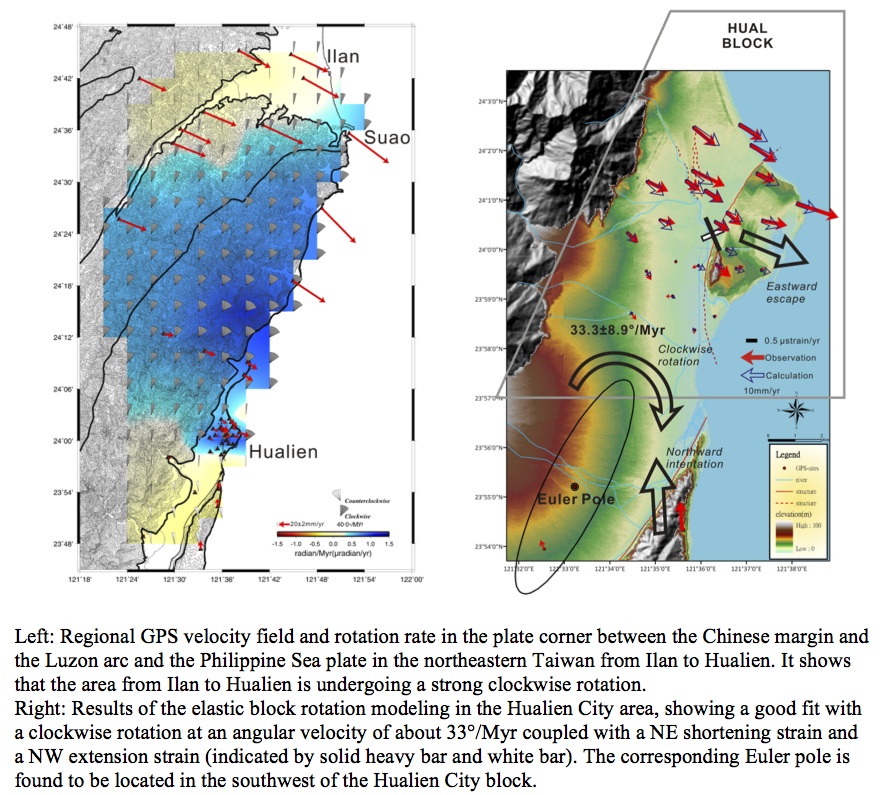