V31B-4757:
Infiltration of Refractory Melts into the Sub-Oceanic Mantle: Evidence from Major and Minor Element Compositions of Minerals from the 53° E Amagmatic Segment Abyssal Peridotites at the Southwest Indian Ridge

Peridotites in this study are from the 53° E amagmatic segment at the Southwest Indian Ridge. These peridotites are suggested as highly depleted buoyant mantle drawn up from the asthenosphere beneath southern Africa during the breakup of Gondwanaland (4) and are residues of multi-stage melt extracting in both spinel and garnet field. We present a detailed analysis of mineral compositions by both the EMPA and LA-ICPMS. Mineral phases in 53°E peridotites have mantle major element compositions, although minerals show variations with the crystal size and the location from cores to rims (Fig.1). In conjunction with the profile analysis of large clinopyroxene crystals, our results document the melt infiltration occurred at the ultraslow-spreading environment. At least two kinds of percolation melts are distinguished. They are normally MORB-like melt and ultra-depleted melt. 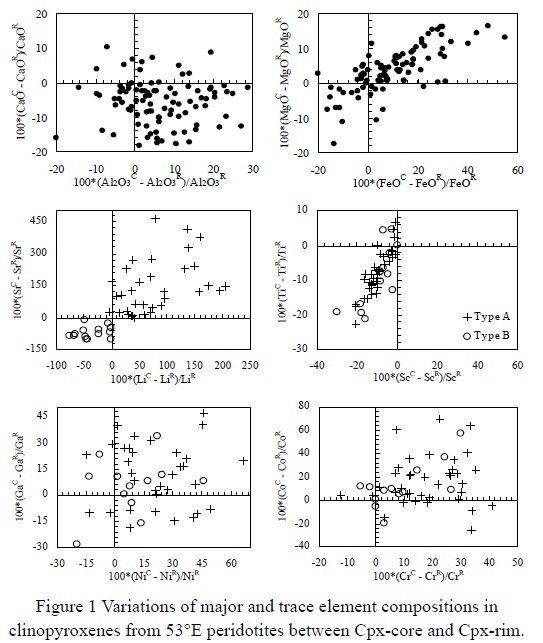