The high complexity and poor knowledge of the constitutive properties of porous rocks are principal obstacles for the modeling of their deformation. Normally, the constitutive lows are to be derived from the experimental data (nominal strains and stresses). They are known, however, to be sensitive to the mechanical instabilities within the rock specimen and the boundary (notably friction) conditions at its ends. To elucidate the impact of these conditions on the measured mechanical response we use 3-D finite-difference simulations of experimental tests. Modeling of hydrostatic tests was chosen because it does not typically involve deformation instabilities. The ends of the cylindrical ‘rock sample’ are in contact with the ‘steel’ elastic platens through the frictional interfaces. The whole system is subjected to a normal stress Pc applied to the external model surface. A new constitutive model of porous rocks with the cap-type yield function is used. This function is quadratic in the mean stress σm and depends on the inelastic strain γp in a way to generate strain softening at small σm and strain-hardening at high σm. The corresponding material parameters are defined from the experimental data and have clear interpretation in terms of the geometry of the yield surface. The constitutive model with this yield function and the Drucker-Prager plastic potential has been implemented in 3-D dynamic explicit code Flac3D. The results of an extensive set of numerical simulations at different model parameters will be presented. They show, in particular, that the shape of the ‘numerical’ hydrostats is very similar to that obtained from the experimental tests and that it is practically insensitive to the interface friction. On the other hand, the stress and strain fields within the specimen dramatically depend on this parameter. The inelastic deformation at the specimen’s ends starts well before reaching the grain crushing pressure P* and evolves heterogeneously with Pc. Initially it is concentrated near the sample’s ends and then propagates towards its centre such that the rate of γp (rate of material damage) at the specimen’s ends is first maximal and then minimal, which is also suggested by the acoustic emissions (Figure). The obtained results suggest ways of improvements of the rock testing. 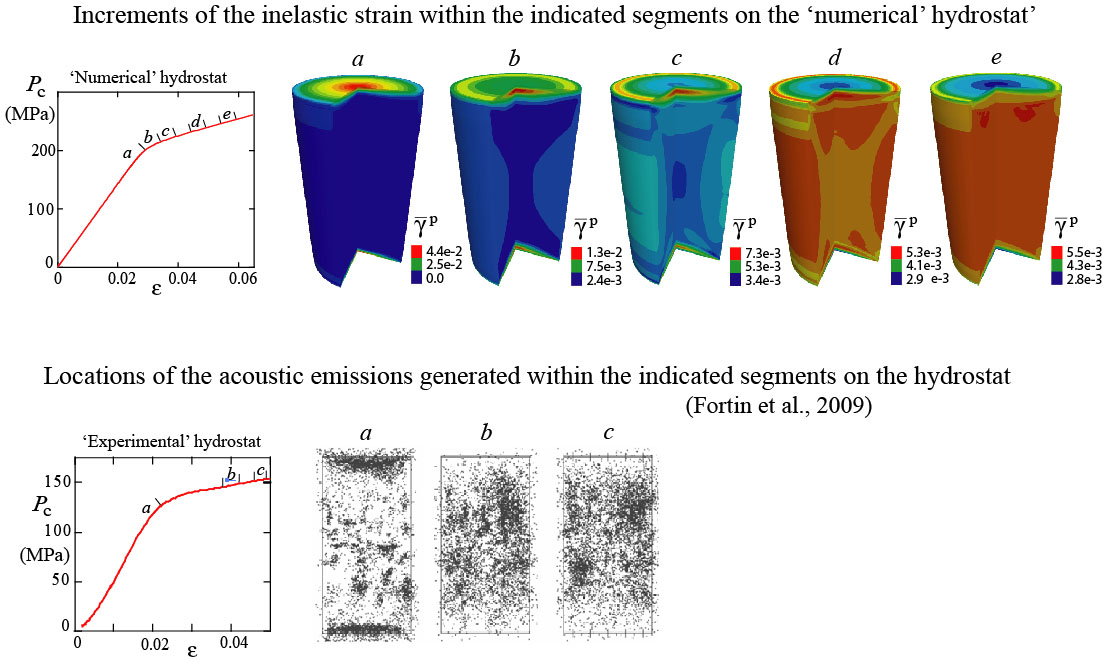