In 2010 CARB reported 9,000 people in California die prematurely each year as a result of exposure to particulate emissions. Public’s exposure to particulate emissions is known to be highest on highway during daily commute. Total particle concentrations vary temporarily and spatially due to many reasons including particle nucleation, traffic, and meteorological conditions. The stationary ambient monitoring sites are too sparsely located to measure these variations on highway. Also, emissions from highways can be included in the emission inventory which can improve modeler capability to predict at much finer scale. Emissions from highways are vary temporally and spatially. This study used a mobile platform to measure total particle number, total particle surface area and average particle diameter in Lagrangian approach. The study will report occurrence and frequency of hot spots for particle nucleation on highway and temporal/ spatial variations of particle concentrations on highway. This will enable better assessment of public’s exposure to particulate emissions on highway by transportation and propose a methodology how to obtain emission inventory for major highways. 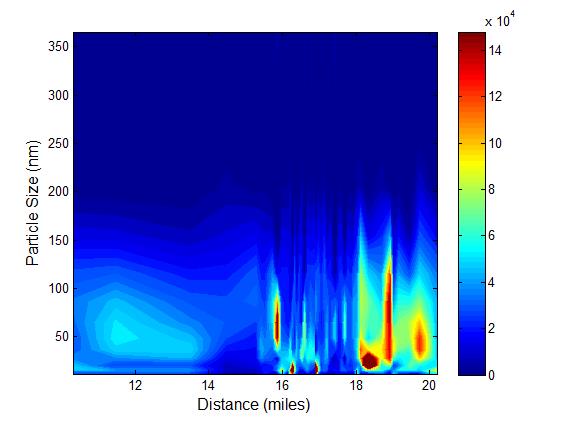