Central Chile is a tectonically active, drought-prone region sensitive to latitudinal variations in large-scale cold fronts associated with fluctuations of the Pacific subtropical high. Holocene high-resolution records of climate and volcanic events could help inform more on the frequency of extensive droughts as well as volcanic and seismic hazards. LdM is a high altitude, volcanic lake located in the Transition Southern Volcanic Zone (~36°S, 2200 m.a.s.l). The LdM volcanic field is a very seismically and volcanically active zone in the Andes, with several caldera-forming eruptions over the last 1.5 Ma, and intense postglacial activity.
In 2013, we recovered over 40 m of sediment cores at four sites of LdM and collected > 20 km of seismic lines. The cores were imaged, their physical and geochemical properties analysed with a Geotek MSCL and XRF scanner respectively, and sampled for TOC, TIC, TS, TN, BioSi, and bulk mineralogy. The chronology was constructed with a Bayesian age-depth model including 210Pb-137Cs, the Quizapú volcanic ash (1932 AD) and 17 AMS 14C dates. The 4.8 m long composite sequence spans the Late glacial and Holocene.
Sediments are massive to banded, quartz and plagioclase-rich silts with variable diatom (BioSi, 15- 30 %) and organic matter content (TOC, 1–5 %). Four main units have been defined based on sedimentological and geochemical composition. The transition from Unit 4 to 3 is ascribed to the onset of the Holocene; Unit 2 spans the mid Holocene, and Unit 1 the last 4 ka. Higher (lower) TOC, Br/Ti and Fe/Mn ratios in units 1 and 3 (2 and 4) suggest higher (lower) organic productivity in the lake and dominant oxic (anoxic) conditions at the bottom of the lake. Up to 17 ash and lapilli layers mark volcanic events, mostly grouped in units 1 and 3. Periods of higher lake productivity (units 1 and 3) are synchronous to higher frequency of volcanic events. Some climate transitions (LIA, 4ka, 8ka and 11ka) are evident in the LdM sequence underlining their paleohydrological regional significance. 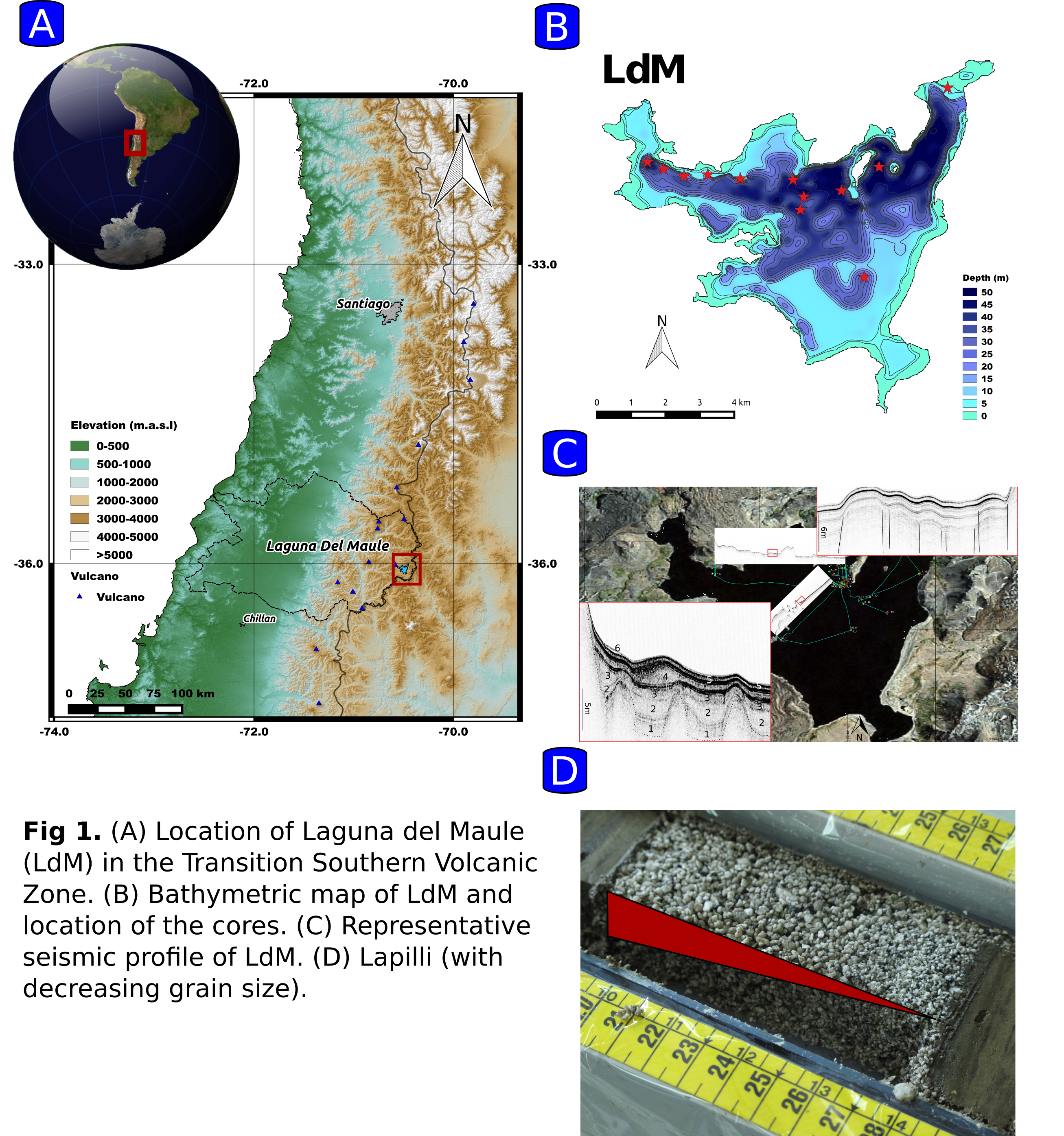