South China Sea basin, which evolved from Cenozoic continental margin rifting and subsequent seafloor spreading, is a classic example of a marginal sea in Western Pacific. Since the early 1980’s, several models have been proposed for the formation of this sea basin. The previous studies were based mainly on the distribution of magnetic anomaly lineation obtained from aerial and shipboard measurements. However, large water depth (over 4.5km) and thick sediment cover (up to 1km or more) make the magnetic anoamaly information not so well displayed in aerial and shipboard data. To better understand the evolution of the sea basin, we increased anomaly amplitudes by collecting magnetic data along deep-tow profiles over the magnetic lineations in the South China Sea oceanic area. The one across the southwest subsea basin was analyzed first.

The total field magnetic measurements were processed through filtering, resampling, diurnal variation removal, continuation to a level datum, regional field correction, projection to a common azimuth, and deskewing. A magnetic polarity reversal timescale was constructed by matching deep-tow anomalies with a simple, rectangular block magnetization model with the expansion rate for oceanic crust. We analyzed the spreading duration, rate, asymmetry, and reversal events of Southwest subbasin, in reference to the recent GTS2012 geomagnetic polarity representative data and concluded that the Southwest subbasin opened from around 21.767 Ma and stopped around C5C at about 15.974Ma. The full spreading rate varied from 8 to 40 cm/yr. Spreading is usually asymmetric by showing alternate faster spreading rate in one slab than the other in different time periods. From the comparison, several small reversal were revealed in addition to the standard geomagnetic polarity. These findings helped to understand the evolution of the Southwest subbasin of South China Sea and will also help to establish new reversal discrimination. 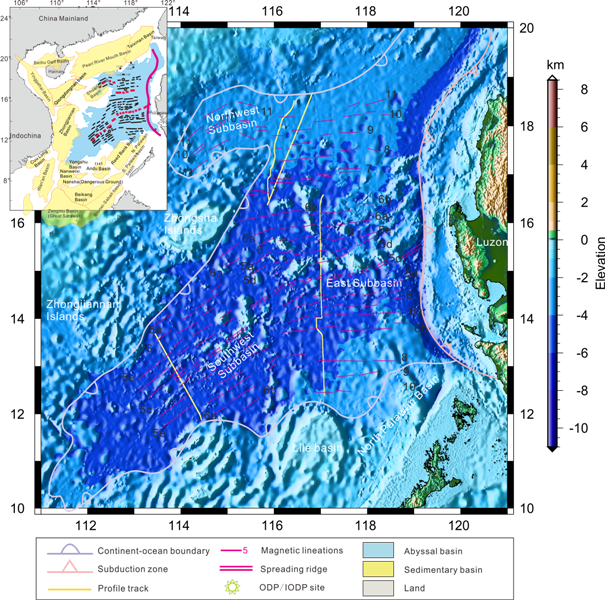