In recent years, measurements of atmospheric carbon dioxide with high precision and accuracy have become increasingly important for climate change research, in particular to inform terrestrial biosphere models. Anthropogenic carbon dioxide emissions from fossil fuel burning have long been recognized to contribute a significant portion of the carbon dioxide in the atmosphere. Here, we present an approach to remove the traffic related carbon dioxide emissions from mole fractions measured at a tall tower by using the corresponding carbon monoxide measurements in combination with footprint analyses and transport modeling. This technique improves the suitability of the CO2 data to be used in inverse modeling approaches of atmosphere-biosphere exchange that do not account for non-biotic portions of CO2. In our study region in Oregon, road traffic emissions are the biggest source of anthropogenic carbon dioxide and carbon monoxide. A three-day mobile campaign covering 1700 km of roads in northwestern Oregon was performed during summer of 2012 using a laser-based Cavity Ring Down Spectrometer. The mobile measurements incorporated different roads including main highways, urban streets, and back-roads, largely within the typical footprint of a tall CO2 observation tower in Oregon’s Willamette Valley. For the first time, traffic related CO:CO2 emission ratios were measured directly at the sources during an on-road campaign under a variety of different driving conditions. An average emission ratio of 7.43 (±1.80) ppb CO per ppm CO2 was obtained for the study region and applied to separate the traffic related portion of CO2 from the mole fraction time series. The road traffic related portion of the CO2 mole fractions measured at the tower site reached maximum values from 9.8 to 12 ppm, depending on the height above the surface, during summer 2012. 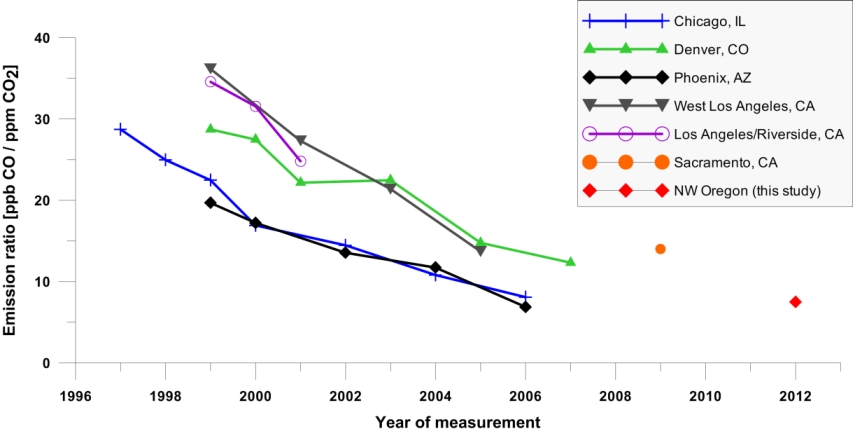