To address this knowledge gap, our team deployed a WINDCUBE 200S scanning lidar in a 300-MW operating wind farm as part of the CWEX-13 field experiment. The lidar was deployed ~2000 m from a row of four turbines, such that wakes from multiple turbines could be sampled with horizontal scans. Twenty minutes of every hour were devoted to horizontal scans at ½ degree resolution at six different elevation angles. Twenty-five days of data were collected, with wind speeds at hub height ranging from quiescent to 14 m/s, and atmospheric stability varying from unstable to strongly stable. The example scan in Fig. 1a shows wakes from a row of four turbines propagating to the northwest.

This extensive wake dataset is analyzed based on the quantitative approach of Aitken et al. (J. Atmos. Ocean. Technol. 2014), who developed an automated wake detection algorithm to characterize wind turbine wakes from scanning lidar data. We have extended the Aitken et al. (2014) method to consider multiple turbines in a single scan in order to classify the large numbers of wakes observed in the CWEX-13 dataset (Fig. 1b) during southerly flow conditions.

The presentation will explore the variability of wake characteristics such as the velocity deficit and the wake width. These characteristics vary with atmospheric stability, atmospheric turbulence, and inflow wind speed. We find that the strongest and most persistent wakes occur at low to moderate wind speeds (region 2 of the turbine power curve) in stable conditions. We also present evidence that, in stable conditions with strong changes of wind direction with height, wakes propagate in different directions at different elevations above the surface. Finally, we compare characteristics of wakes at the outside of the row of turbines to wakes from turbines in the interior of the row, quantifying how wakes from outer turbines erode faster than those from interior. 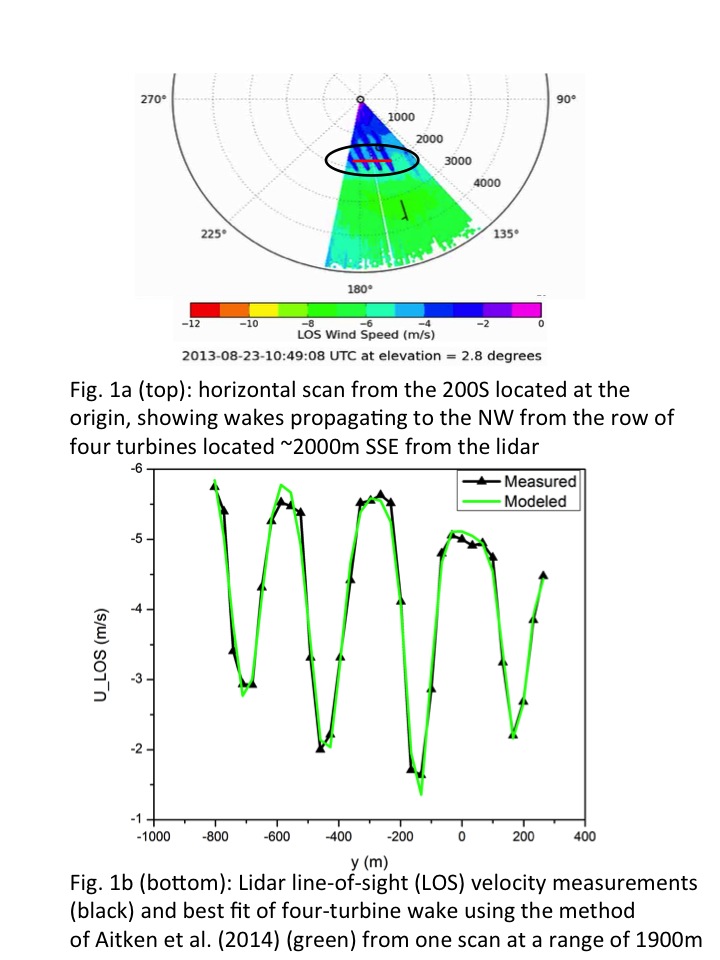