MLTWA using single earthquake data may, therefore, be helpful to reduce observational scatter by considering radiation pattern, focal depth, and regional alteration. To take into account radiation pattern of single event data, focal mechanism algorithm is implanted to code of DSMC method. In addition, this study selected data from the previous study using focal depth of about 10 km and compared the results between single events and multiple events.

MLTWA using single event provided stable results for all frequencies if number of recorded station is 10 or/and more. Although only focal depth and regional alteration was considered excluding radiation pattern, result of MLTWA using single event showed plausible results by regional combination - Q-1 values of two regionally reliable events are selected as the lower and upper bounds. By this combination, the three zones of Q-1 values were obtained for A as Gyeongsan Basin, B as western plain region, and C as rugged terrain such as mountainous region and sea with abrupt change of depth. The Q-1 values in descending order are C, A, and B, remarkable of which is at low frequencies of Qs−1. The values of Zone A and B correlate well with those of regional QLg−1 at 1 Hz. The highest Q−1 of zone C correlates with the result of worldwide studies showing high Q−1 values by the effect of lateral path propagating through high mountainous region.

In Fig. 1, Q−1 values generally correlate with tectonic activity and volcanism, measured hypocentral distance, and focal depth of event data. In addition, high Q−1 values are observed for the regions including zone C by the effect of lateral path propagating through high mountainous region. This path effect seems to be required a quantitative analysis by using tomographic approaches.

Fig. 1. Comparison of Qs−1 from this study (Zone A, B, and C) with those from the other studies including worldwide regions. 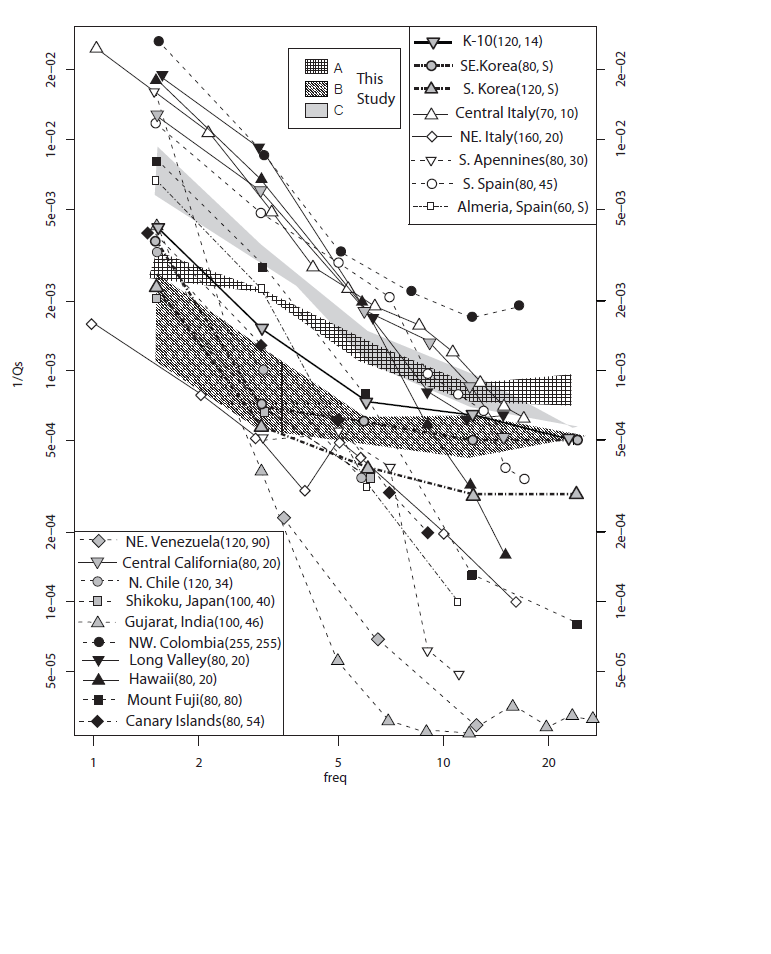