It is known that quiescent periods with only shallow cumuli prevalent are frequently observed even in the deep Tropics, which is considered from the climatological perspectives as an area harboring vigorous deep convection. It is argued in this work that the free-tropospheric (FT) moisture convergence is a crucial factor for separating the stable maintenance of isolated shallow cumuli in the quiescent periods from the self-sustaining growth of organized convective systems in the dynamic periods over tropical oceans. The analysis is based on a variety of satellite measurements including Aqua AIRS T and q soundings and QuikSCAT surface wind, composited with reference to the time before or after the occurrence of precipitating clouds detected by TRMM PR. The FT moisture convergence and updraft moisture flux at cloud base are then derived from this dataset under large-scale moisture budget constraint (see Figure). Free-tropospheric precipitation efficiency (FTPE), or the ratio of precipitation to updraft moisture flux at cloud base, is introduced as a measure of convective intensity (rather than the population) over the large-scale domain. The following hypothesis is discussed in light of the analysis results. Isolated shallow cumuli would stay shallow when large-scale FT moisture is diverging (although moisture is weakly converging when integrated over the whole troposphere) since an increase in cumulus population would be counteracted by an additional moisture divergence in the FT. When large-scale FT convergence is positive, in contrast, developing clouds would induce a more moisture input and allow an unstable growth to a highly organized convective system. Zero FT moisture convergence may serve as the neutrality separating the negative feedback acting in the quiescent regime from the positive feedback instrumental for the dynamic regime. 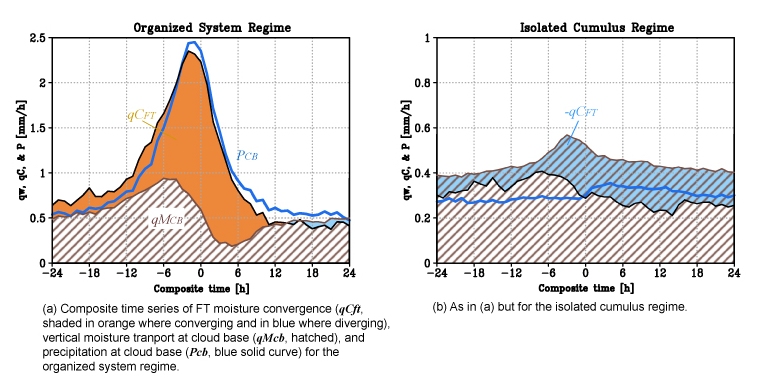