Acoustic waves from volcanic eruptions are often observed as infrasound in near fields. Part of them propagate upward and disturb the ionosphere, and can be observed in Total Electron Content (TEC) data derived by Global Navigation Satellite System (GNSS) receivers. In the past, Heki (2006 GRL) detected ionospheric disturbances by the 2004 explosion of the Asama Volcano, central Japan, and Dautermann et al. (2009 JGR) studied the 2003 eruption of the Soufriere Hills volcano in Montserrat, West Indies. Here we present new examples, and try to characterize such disturbances.

We first show TEC disturbances by the 2014 February Plinian eruption (VEI 4) of the Kelud volcano, East Java, Indonesia (Figure), observed with a regional GNSS network.The 2014 Kelud eruption broke a lava dome made by 2007 eruption and created a new creator. Significant disturbances were detected with four GPS and two GLONASS satellites, and the wavelet analyses showed that harmonic oscillations started at ~16:25 UT and continued nearly one hour. The frequency of the oscillation was ~3.8 mHz, which coincides with the atmospheric fundamental mode. We also confirmed concentric wavefronts, moving outward by ~0.8m/sec (stronger signals on the northern side). These features are similar to the 2003 Soufriere Hills case, although the signals in the present Kelud case is much clearer.

Next, we compare them with ionospheric disturbances by Vulcanian explosions that occurred recently in Japan, i.e. the 2004 Asama case and the 2009 Sakurajima, and the 2011 Shin-moedake eruptions. They are characterized with one-time N-shaped disturbances possibly excited by the compression of the air above the vents. On the other hand, data from nearby seismometers suggested that atmospheric oscillations of various frequencies were excited by this continuous Plinian eruption. Part of such oscillations would have grown large due to atmospheric resonance. 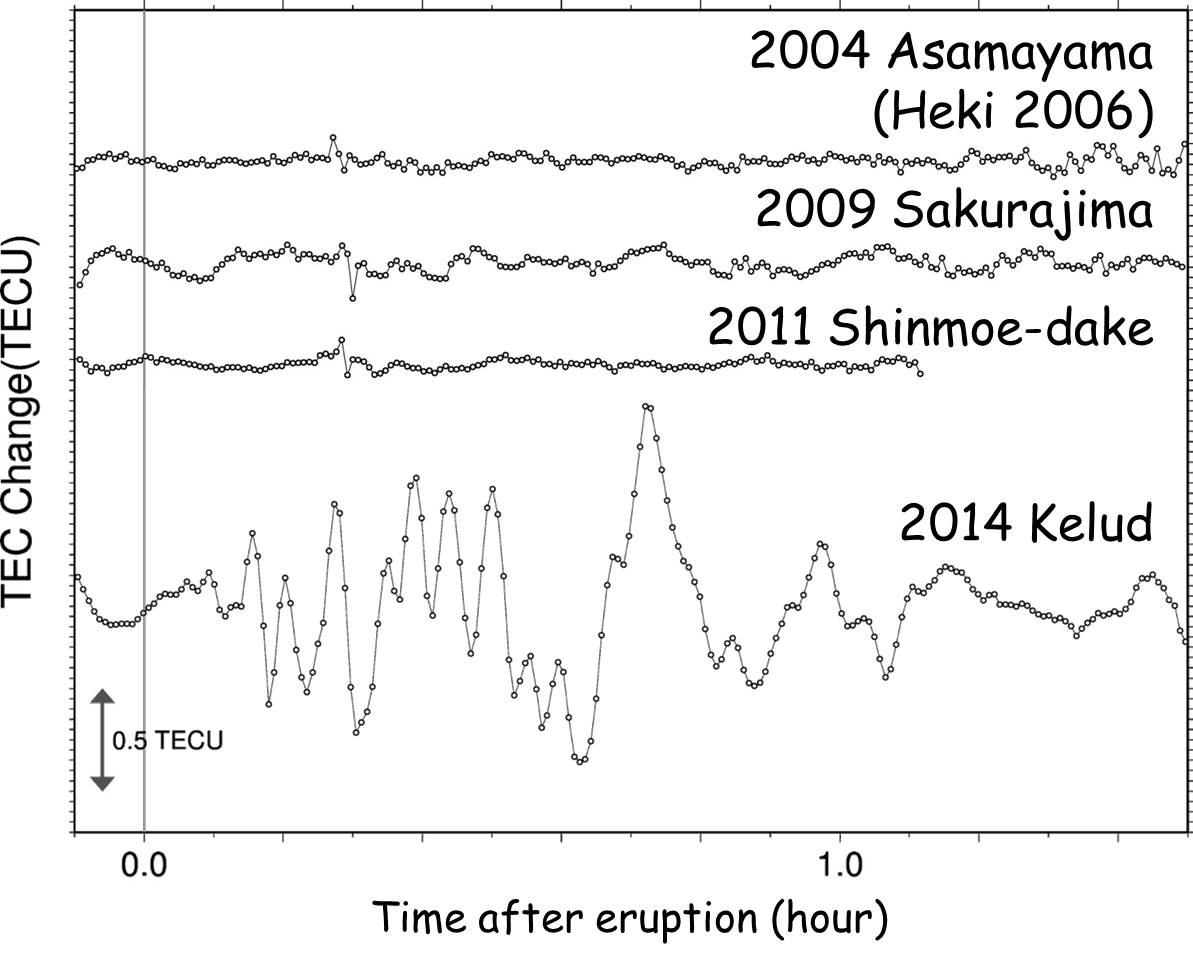