First, it was developed a formulation in the data space, following the work of W. Siripunvaraporn (2005), that allows the joint inversion of the resistivity model and the static shift effect. That formulation makes it possible to use any linear representation for removing the static shift in the MT stations. This property permits compare the representation proposed by Sasaki (2004) and the static shift tensor, which use a 2x2 matrix to correct the effect. The last one is suggested to be a better model for 3D MT responses, because it can reproduce the distortion on the phase of MT data.

Twenty one stations, measuring MT and TDEM methods, were acquired at the east side of the Pisagua town in the North of Chile (figure). In this place, there is an evident scarp on the topography that reveals the existence of an important fault (Pisagua Fault). Also, the Chilean desert at this location is characterized by the presence of shallow nitrate deposits (called “caliche”), whose have an elevated electrical resistance and can produce the static shift effect in the MT stations. For those reasons it was expected that the sector around the Pisagua Fault was an adequate place to evaluate static correction methods, because the data certainly would be distorted by the static shift and a successful correction method should reveal the fault observed at surface.

The MT data acquired have mostly a 3D dimensionality (using A. Marti criteria, 2009) and show signs of being static shifted. A 3D inversion of this data, without considering the static shift, results in a poor misfit and the Pisagua fault does not appear in the model obtained. Calibrating the MT data with the TDEM soundings marginally improve the results. Only the joint inversion methods that include static shift effect could obtain models where the Pisagua fault is present and their responses have an adequate misfit with the data. 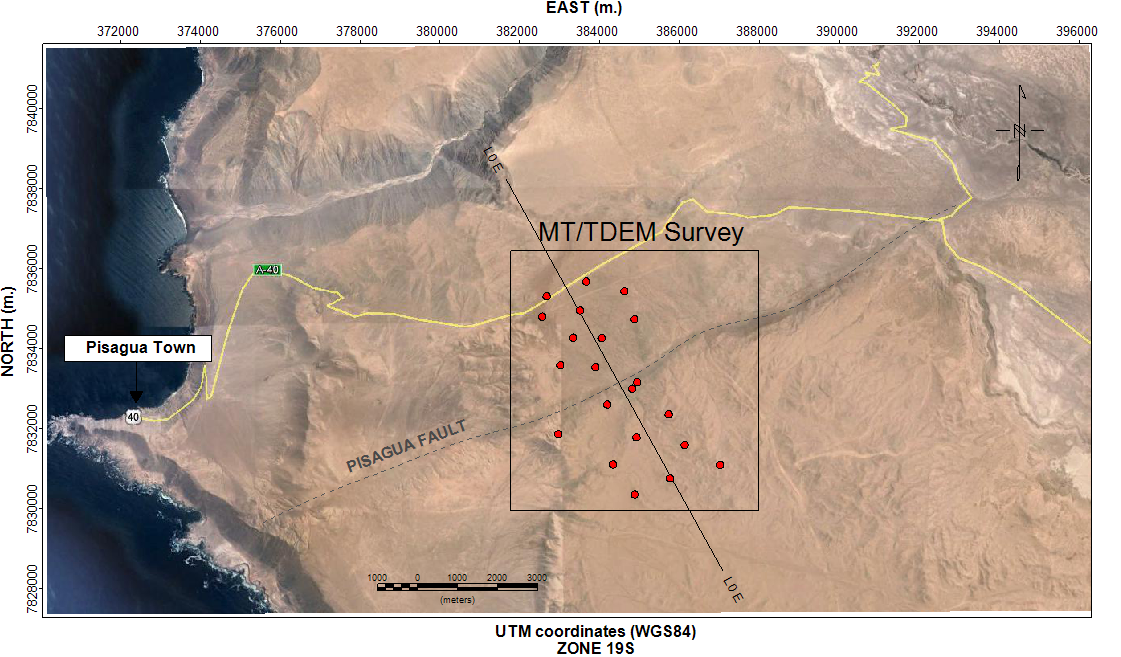