The magnitude of stress in the continental lithosphere, particularly the lithospheric mantle, is highly uncertain and frequently debated, but is critical to understanding continental mechanics. Differential stress can be estimated using paleopiezometry, which is a relationship between dynamically recrystallized grainsize and flow stress. This relationship has been quantified experimentally for a wide range of earth materials, including olivine, quartz, plagioclase, calcite, and numerous metals. The empirical piezometer for olivine (Van der Wal et al., 1993) has been used to estimate stress magnitudes for mantle rocks from several regions worldwide. In contrast, piezometers for other minerals commonly recrystallized in mantle/lower crustal rocks, including orthopyroxene (OPX) and clinopyroxene, are poorly constrained. The two existing OPX piezometers are based on experimental studies and predict OPX grain sizes to be larger than olivine at high stresses. Observations from natural rocks, however, show the opposite relationship: OPX grainsizes are smaller than olivine at high stresses. This study explores the stress–grainsize relationship between dynamically recrystallized OPX and olivine in naturally-deformed peridotites derived from a wide range of pressure–temperature conditions. We measure OPX and olivine grainsizes in banded peridotites that appear to have recrystallized under identical stress conditions and are not mixed. Differential stress is estimated using the well constrained olivine piezometer. We establish a stress(σ)–grainsize(d) relationship for OPX (σ = 406.1d(-.52)) which predicts that recrystallized grains in OPX are smaller than olivine above ~25 MPa (~200 μm), and larger than olivine for stresses below this value. This piezometer can be used to estimate stress magnitudes in rocks in which OPX is one of the primary recrystallized phases, including granulites, pyroxenites and other mantle/lower crustal rocks in which olivine or plagioclase are unsuitable. 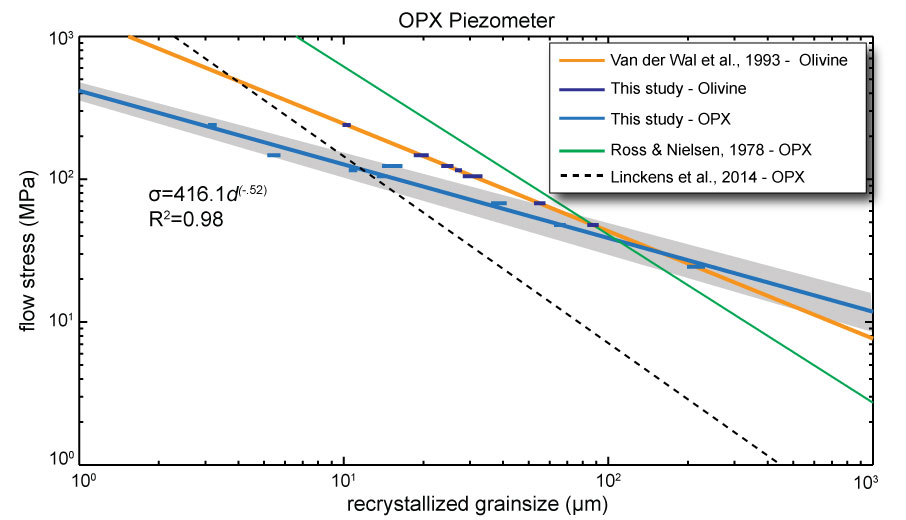