We first study a state-of-the-art reanalysis, NASA’s Modern Era Retrospective-analysis for Research and Applications (MERRA thereafter). Analysis increments from two 2-year analyses with SSM/I (referred to as MERRA) or without SSM/I (referred to as NoSSMI), are compared and their climatological differences are defined as correction terms. The correction terms are then introduced into the tendency equation of the forecast model, i.e., GEOS-5. The debiased reanalysis without SSM/I observations shows improvements in almost all fields, even in precipitation field that is generally considered to be uncertain on all time and space scales, but the correction is underestimated by about a factor of 2. We believe that this is because the correction terms defined here do not take into account the nonlinear interactions between the temperature and humidity fields observed by SSM/I, which would introduce accumulated errors during the 2-year experiment period. This deficiency can be corrected by doing the No-SSMI analysis using a MERRA background, as in the method of Danforth et al. (2007)

We test the new correction method in a simpler data assimilation system, SPEEDY-LETKF because with our limited computational resource it is infeasible to apply this method to the complex MERRA system. The new method defines the correction terms by calculating the difference of analysis increments from the following two analyses, 1) assimilating both RAOB and AIRS observations, named RaobAirs, and 2) assimilating only RAOB but with its background coming from RaobAirs at every 6-hour analysis cycle. This new method limits the growth of nonlinear interactions between variables observed by AIRS, and the results show that it is significantly more effective in minimizing reanalysis “jumps” than the method similar to that applied to MERRA system. 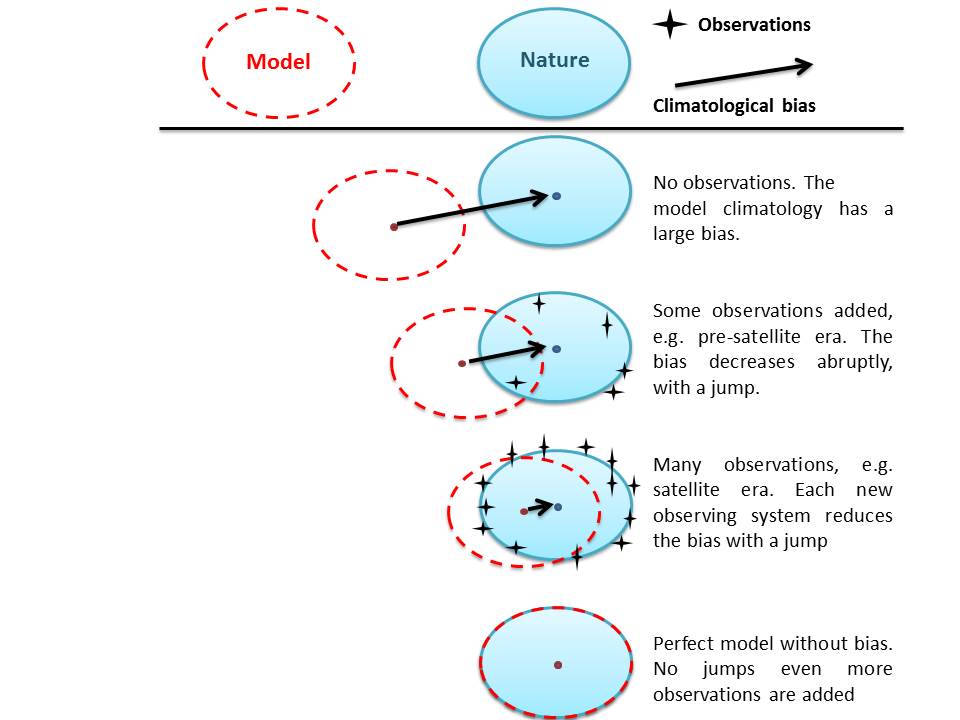