Long et al. (2009, JGR 114) analyzed surface radiation data spanning 1995 through 2007 from several ARM and six SURFRAD sites across the continental US, and showed an average 8 Wm-2/decade brightening in all-sky downwelling SW. The study also showed a 5 Wm-2/decade increase in the clear-sky downwelling SW, an expected result of decreasing aerosol optical depths during the same time period (Augustine et al., 2008, JGR 113). However, the unexpected result of the Long et al. study is that the 5 Wm-2/decade increase is in the diffuse SW, while the direct SW remained virtually unchanged...opposite what is expected for aerosol direct effect due to decreases in aerosols. With detailed radiative transfer modeling and correlation with US FAA commercial flight hours through the same years, Long et al. speculated that while the decreased aerosols did increase the total SW, an increase in high, sub-visual contrail-generated ice haze repartitioned the increase into the diffuse SW component through large-mode scattering.

Subsequent attempts to investigate the veracity of this speculation using long time series of ARM Micropulse and Raman lidar data proved untenable due to instrument limitation and continuity issues. However, similar to using the red/blue ratio of pixel color amounts in processing color sky images to infer clouds, we have used clear-sky diffuse SW irradiance measurements from the Multi-Frequency Rotating Shadowband Radiometer (MFRSR) 870 and 415 nm spectral channels to look at any possible trends suggesting "whitening" of the cloud-free skies over the ARM SGP site. We will present our preliminary findings to date of these investigations suggesting indeed that there has been an aggregate "whitening" of the sky conditions we typically consider to be "cloud free." 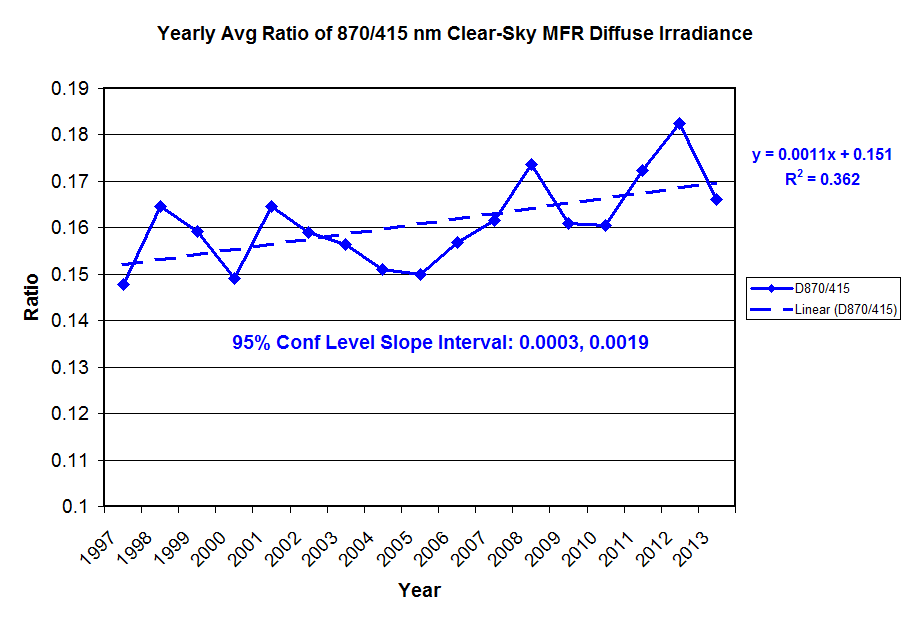