EP14B-08:
Does Temperature (Rather than Precipitation) Dictate the Geomorphic Legacy of Glacial Intervals in Unglaciated Mid-Latitude Terrains?

Whereas glaciated landscapes record increased erosional efficiency through moraines and U-shaped valleys, unglaciated hillslopes and rivers lack a mechanistic theory for climate controls on their dynamics and form. Changes in precipitation and associated aggradation due to vegetation loss or incision due to increased river discharge are commonly invoked when considering the effect of glacial intervals on unglaciated terrains, but there is scant evidence supporting or discounting these hypotheses. Surprisingly, there is little consideration that temperature, rather than precipitation, may dictate the frequency, magnitude, or style of erosion in unglaciated landscapes during glacial intervals. Here, we present results combining a mechanistic frost-cracking model with downscaled general circulation model output to predict the extent and intensity of sediment production via frost processes across the unglaciated Oregon Coast Range (OCR) during the Last Glacial Maximum (LGM). Our results show that in this mid-latitude region, well south of the Cordilleran ice sheet, frost-driven processes likely shaped 90% of the present-day landmass during the LGM. A suite of geomorphic and vegetation data from a 50-ky sediment core from a paleo landslide-dammed lake in the OCR support our model results. Our study site, Little Lake, is located in the central portion of the OCR, over 400 m south of the maximum extent of the Cordilleran ice sheet. Based on 10Be-derived erosion rates, present-day catchment erosion rates average 0.07 ± 0.03 mm/yr (mean ± sd), while LGM erosion rates remained constant around 0.19 ± 0.01 mm/yr. These LGM values are nearly 3X greater than present-day erosion rates and coincide with high frost cracking intensity predicted by our model. We also observe a transition from finely laminated lacustrine clays and sands to coarse lacustrine blue-grey sands at ~ 28 ka, during the transition to the LGM. The presence of Picea sitchensis (Sitka spruce) and Abies lasiocarpa (subalpine fir) in the core during the LGM imply mean annual temperatures of ~ 1 °C and January mean temperatures of ~ -7 °C. Our results suggest that broad swaths of continental landscapes likely experienced accelerated sediment production via frost processes rather than via changes in precipitation during glacial intervals. 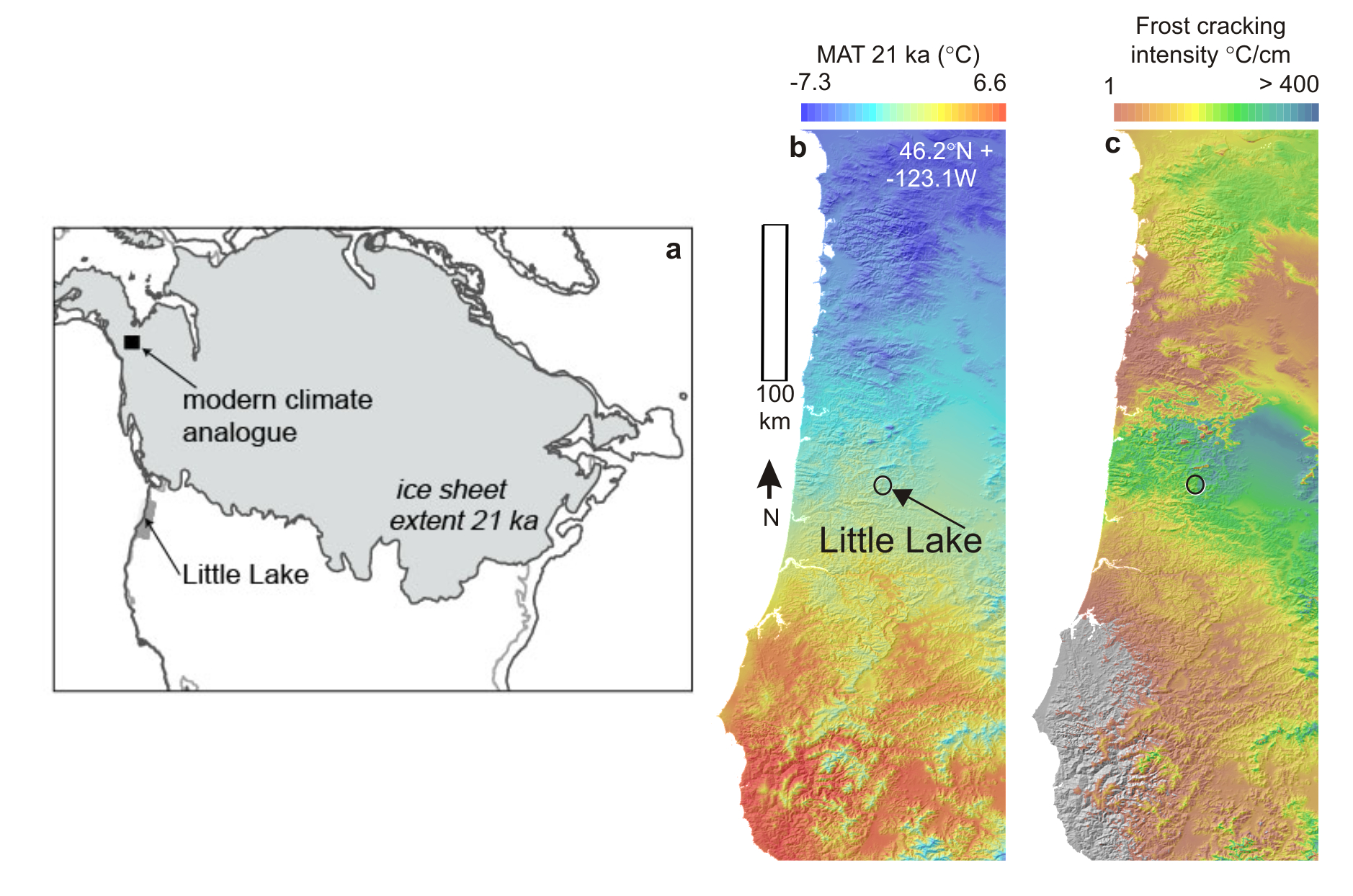