An analysis of the occurrence of fire in Alaskan tundra was completed using the relatively complete historical record of fire for the region from 1950 to 2013. Spatial fire data for Alaskan tundra regions were obtained from the Alaska Large Fire Database for the region defined from vegetation and ecoregion maps. A detailed presentation of fire records available for assessing the fire regime of the tundra regions of Alaska as well as results evaluating fire size, seasonality, and general geographic and temporal trends is included. Assessment of future fire potential was determined for three future climate scenarios at four locations across the Alaskan tundra using the Canadian Forest Fire Weather Index (FWI). Canadian Earth System Model (CanESM2) weather variables were used for historical (1850-2005) and future (2006-2100) time periods. The database includes 908 fire points and 463 fire polygons within the 482,931 km2 of Alaskan tundra. Based on the polygon database 25,656 km2 (6,340,000 acres) has burned across the six tundra ecoregions since 1950. Approximately 87% of tundra fires start in June and July across all ecoregions. Combining information from the polygon and points data records, the estimated average fire size for fire in the Alaskan Arctic region is 28.1 km2 (7,070 acres), which is much smaller than in the adjacent boreal forest region, averaging 203 km2 for high fire years. The largest fire in the database is the Imuruk Basin Fire which burned 1,680 km2 in 1954 in the Seward Peninsula region (Table 1). Assessment of future fire potential shows that, in comparison with the historical fire record, fire occurrence in Alaskan tundra is expected to increase under all three climate scenarios. Occurrences of high fire weather danger (>10 FWI) are projected to increase in frequency and magnitude in all regions modeled. The changes in fire weather conditions are expected to vary from one region to another in seasonal occurrence as well as severity and frequency of high fire weather danger. While the Alaska Large Fire Database represents the best data available for the Alaskan Arctic, and is superior to many other regions around the world, particularly Arctic regions, these fire records need to be used with some caution due to the mixed origin and minimal validation of the data; this is reviewed in the presentation. 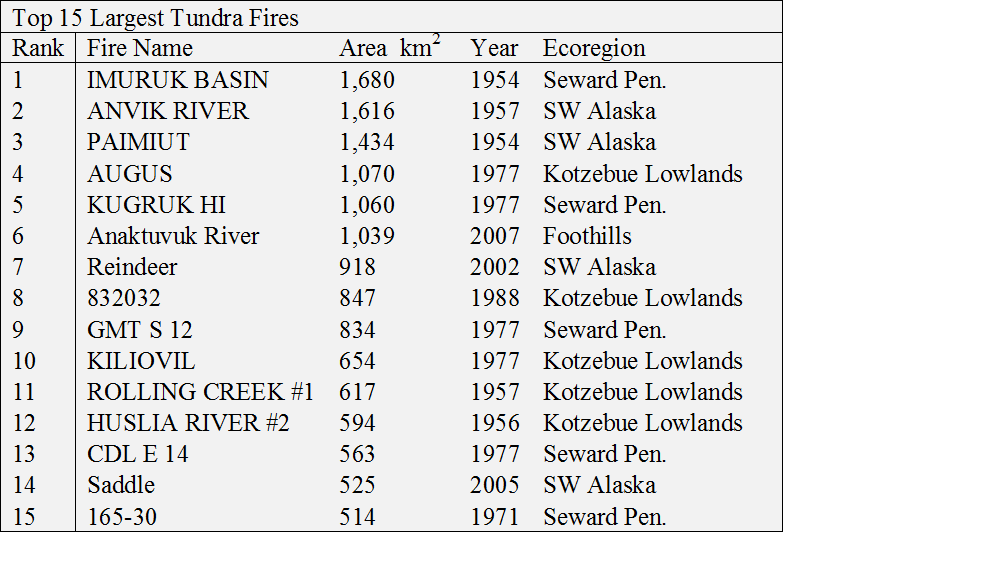