Whether Columbia River Basalts, eastern Snake River Plain and Yellowstone volcanism is related to a mantle plume or plate tectonic processes is a long-standing controversy. There are numerous geological mismatches with the plume model, and logical flaws, including the use of arguments for a deep-mantle origin to support upper-mantle plume models. The sweeping of the USArray seismic network across the continent has recently yielded abundant new seismological results but despite this, the most sophisticated seismic experiment ever staged having targeted the Yellowstone region, seismic analyses have still not resolved the disparity of opinion. This suggests that seismology is fundamentally unable to resolve the plume question for Yellowstone and likely elsewhere. USArray data, have, however, inspired many new models that relate western USA volcanism to shallow mantle convection associated with evolution of the subduction zone to the west. These models assume, however, that all that is required for surface volcanism is melt in the mantle and that the lithosphere is essentially passive. We propose a pure Plate model in which melt is commonplace in the mantle, and its tendency to rise is not the cause of surface eruptions. Instead, it is extension of the lithosphere that permits melt to rise. Eruptions occur where there is extension and not simply where there is melt. The time-progressive chain of rhyolitic calderas in the eastern Snake River Plain-Yellowstone zone formed in response to systematic eastward migration of the axis of most intense Basin Range extension since the province formed at ~ 16 Ma. Rhyolitic volcanism followed migration of the locus of most rapid extension, not vice versa. This model does not depend on seismology to test it, but can be investigated using surface geological observations. 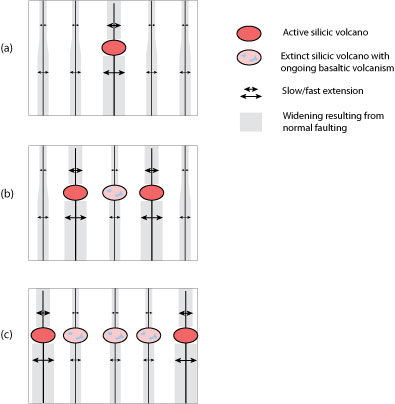