Monitoring microseismicity is important for illuminating active faults and for improving our understanding of earthquake physics. This task is difficult in urban areas where the signal-to-noise ratio (SNR) is poor, and the level of background seismicity is low. One example is the Newport-Inglewood fault (NIF), an active fault that traverses the city of Long-Beach (LB). The catalog magnitude of completeness within this area is M=2, about one unit larger than along other, less instrumented faults in southern California. Since earthquakes obey a power-law distribution according to which for each unit drop in magnitude the number of events increases by a factor of ten, reducing the magnitude of completeness in LB should significantly decrease the time needed for effective monitoring. During 2011, over 5000 seismometers were deployed for exploration purposes in a 70 km2 area covering LB, and recorded continuously for a period of six months. This experiment provides a unique opportunity for studying seismicity along the NIF. The recordings are dominated by anthropogenic noise sources such as the local airport, highways, and pumping in the LB oil field. We utilize array processing techniques to enhance the SNR. We downward continue the recorded wave field to a depth of a few kilometers, which allows us to detect signals whose amplitude is a few percent of the average surface noise. The migrated wave field is back-projected onto a volume beneath the city to search for seismic events. A preliminary analysis revealed a seismic swarm that lasted for a few weeks and exhibited complex spatial distribution. During the swarm coherent energy was continuously emitted from segments whose length is a few hundred meters, and that are located at depths of 10-15 kilometers. We developed a calibration scheme based on synthetic waveform modeling to determine the magnitude of the events, and find that it is considerably smaller than the magnitude of completeness of the local catalog. 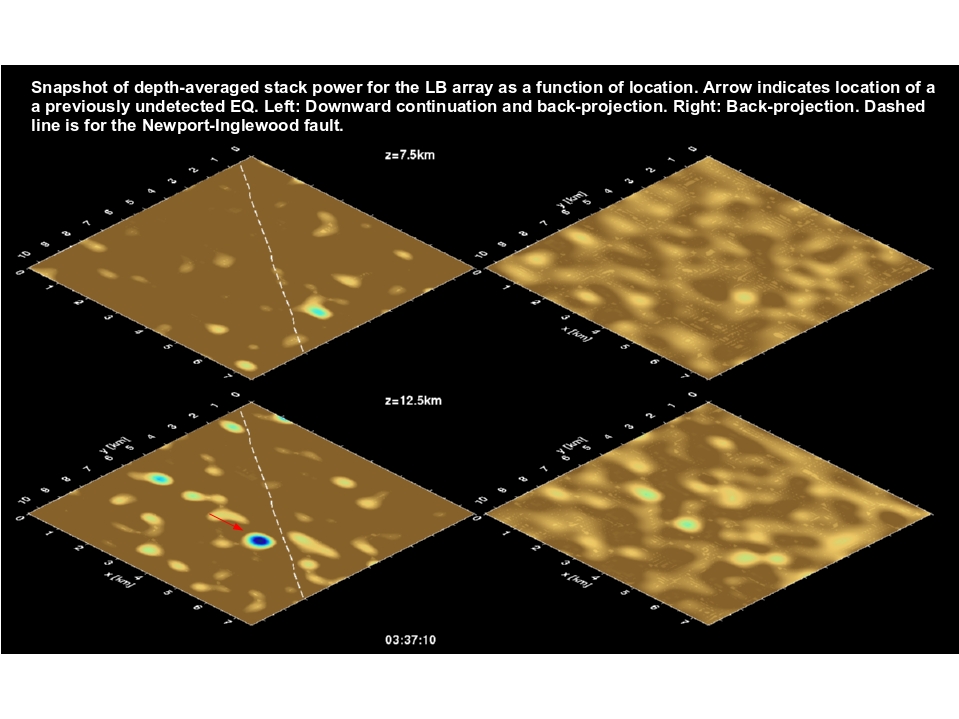