U21A-05:
Between Sunda subduction and Himalayan collision: fertility, people and earthquakes on the Ganges-Brahmaputra Delta

A foreland (Ganges) and a suture (Brahmaputra) river, which both drain the Himalaya, have coalesced to form Ganges-Brahmaputra Delta (GBD), the world’s largest. The GBD progrades along the continental margin, coupled with an advancing subduction to collision transition, deforming the delta as it grows. A better understanding of this time-transgressive system is urgent now that humans are increasing their forcing of the system and exposure to environmental hazards. Among these, earthquake risk is rapidly growing as people move from rural settings into expanding cities, creating unprecedented exposure. The megathrust 1950 M8.7 earthquake in Assam occurred during the monsoon and released 10x the annual sediment load, causing progradation at the coast and a pulse of river widening that propagated downstream. The 1762 M8.8(?) along the Arakan coast extended into the shelf of the delta where coastal tsunami deposits have been identified recently. These events bracket a segment with no credible historic megathrust earthquakes, but could affect far more people. Geodetic and geologic data along this 300 km boundary facing the GBD show oblique contraction. The subaerial accretionary prism (Burma Ranges) is up to 250 km wide with a blind thrust front that reaches ½ way across the delta. The GPS convergence rate of 14 mm/y is consistent with large displacements and long interseismic times, which can account for lack of historic ruptures, but also the potential for catastrophic events. Active folds and shallow thrust earthquakes point to an additional threat from upper-plate seismicity. Much of the current seismicity is in the lower-plate and reaches as far west as Dhaka; it may pose an immediate threat. The folds, and the uplift and subsidence patterns also influence the courses of the rivers. North of the delta, the Shillong plateau is a huge basement cored anticline bounded by the north-dipping Dauki thrust fault. 7 mm/y of N-S shortening and 5 km of structural relief here are consistent with a Pleistocene age for the structure. Subsidence of its foreland has created the seasonal inland sea in Sylhet and influences avulsions of the Brahmaputra. The 1897 M8.0 earthquake caused maximum intensities on the western part of the Shillong massif, suggesting a rupture of the western Dauki fault, leaving the eastern portion as a possible gap. 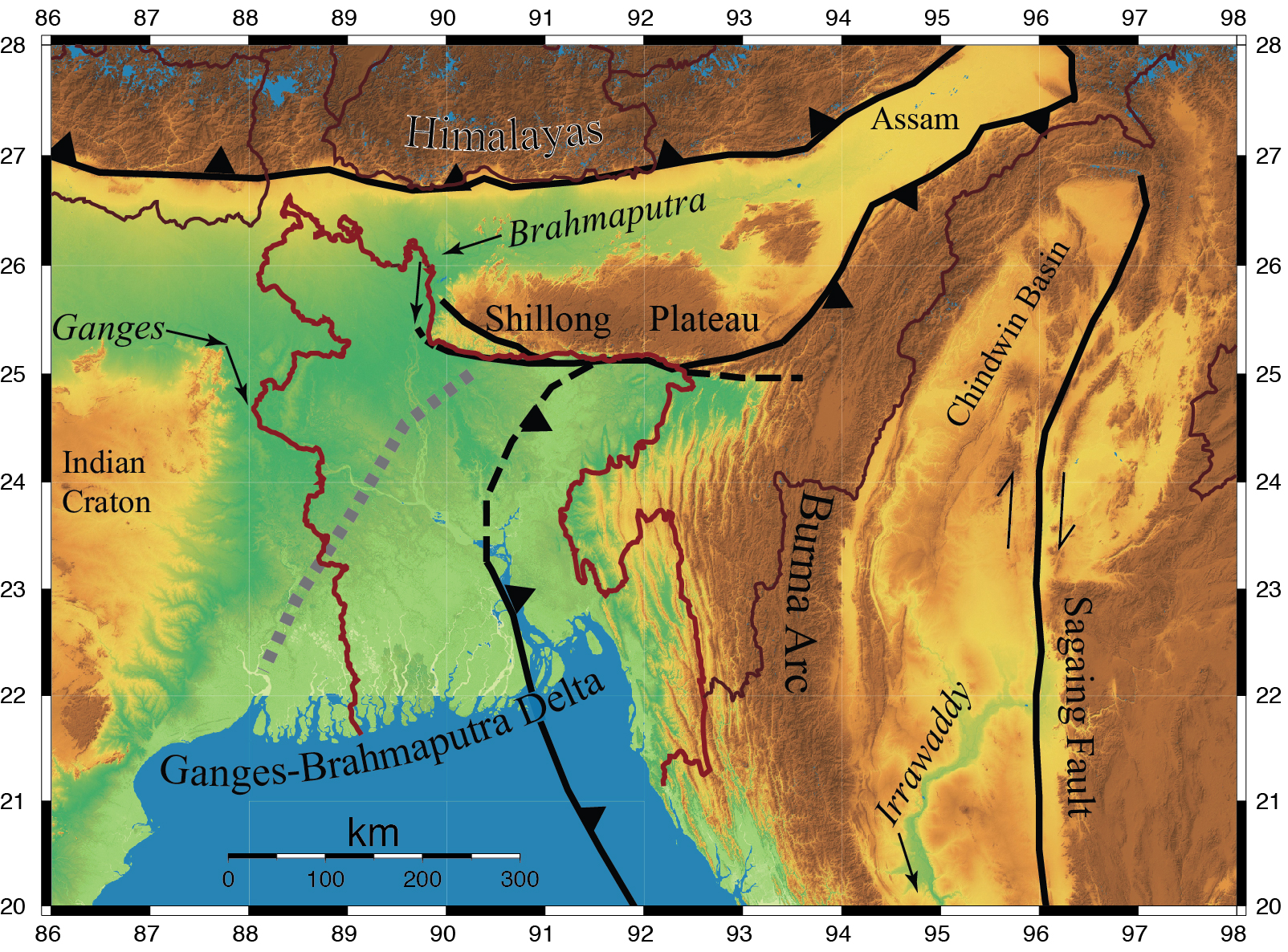