The Earth System Grid Federation (ESGF) Peer-to-Peer (P2P) is an operational system for serving climate data from multiple locations and sources.The ESG-BNU node, established in 2012, is one of the ESGF data nodes, and also the only idp/index node in China. Until now, ESG-BNU node has published 17 experiments of 10,595 GB dataset for CMIP5 and 4 experiments of 1174 GB dataset for GeoMIP generated by the Earth System Model of Beijing Normal University (BNU-ESM) It has provided over 43.0TB data with an average 700 KB/s download speed to scientists all over the world. Especially in China, data users can download the datasets more than 1MB/s. In BNU the speed can reach to over 10MB/s.(Fig.1) As an ESGF Portal node we try to make replicas of other model centers so that data users in China can get the datasets much faster . By analyzing the download information extracted from the thredds log files we found that over 95% data requests were from China, U.S. and Japan.(Fig.2) About 75% downloads came from historical, rcp45 and rcp85 experiments.(Fig.3) And over 79% downloads came from the monthly datasets. So making replicas for those datasets with most interested can meet the needs of most model users and will save over 50% disk space of the data nodes. In our plan, the data volume of the ESG-BNU node will reach to 200TB in the next year. As for the coming CMIP6, data volume may reach to over 3.5EB. Making replica of all experiments maybe too expensive and not necessary for many ESGF nodes. We hope such download statistical analysis can be helpful for ESGF data nodes to decide which experiments should be replicated or be replicated with priority. 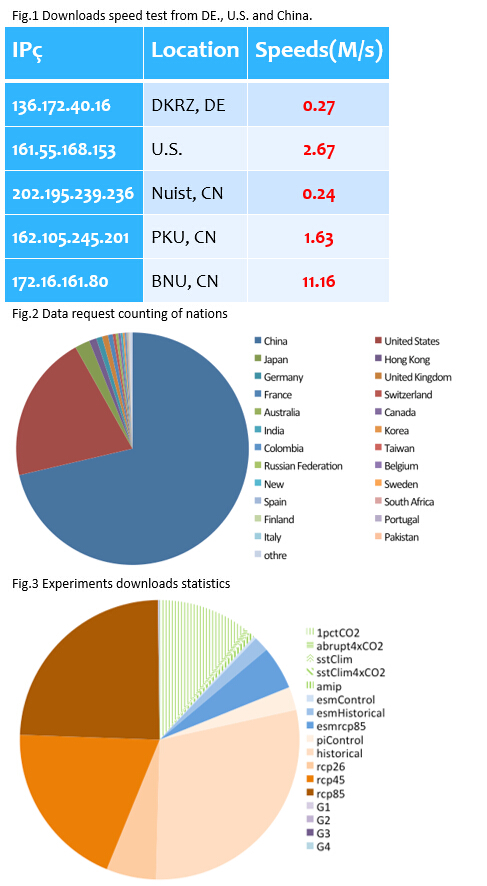