NH43A-3813:
A Study of the Relationship between Mountain Bridges Damaged and Multi-Hazards Induced by Extreme Rainfall

In 2009, typhoon Morakot brought astonishing rainfall and damaged more than 50 bridges in south Taiwan. It is the most serious disaster of historic typhoons for the bridge and roadway damage in the past records. Most of the roads and bridges on No. 18, No. 20 and No.21 Highways were broken (shown as figure) because of great amout materials from landslides and debris flow including of soil, rock and wood, those mixed with water attacked all constructions along highways and finally caused these constructions destroyed. And due to the global climate change, the scale and freuency of these natural disaster are more difficult to predict and measure. Therefore the deeply understanding for the relationship between mountain roadways and multi-hazards is very important. In this study, the author would mainly focus on the broken bridges, and according to the collected rainfall data and post-disaster evidences to analysis the possible hazard resaons in the case of typhoon Morakot in Taiwan.

The authors collected and filed investigated all the 52 bridges data, and classified the reasons of possible causes by analyzing the spatial and rainfall factors of typhoon Morakot. For the distribution analyses of all these bridges, most of the bridges on upstream were caused by debris flow or slope failure because of the very steep terrain and enough soil materials from neighborhood, like landslides or rock falls. The bridges in midstream or downstream were damaged by excessive and rapid stream flow, like scouring, depositing, and very high water level. Due to these flow conditions with sediment, threaten for safety of bridges would be increased. In conclusions, the possible resaons was classified with 4 types by post-investigations and the environment conditions were be used to evulated the causes for these bridges including of Type I- slope failure near stream, Type II- debris flow, Type III- scouring and depositing, and Type IV- excessive peakflow. 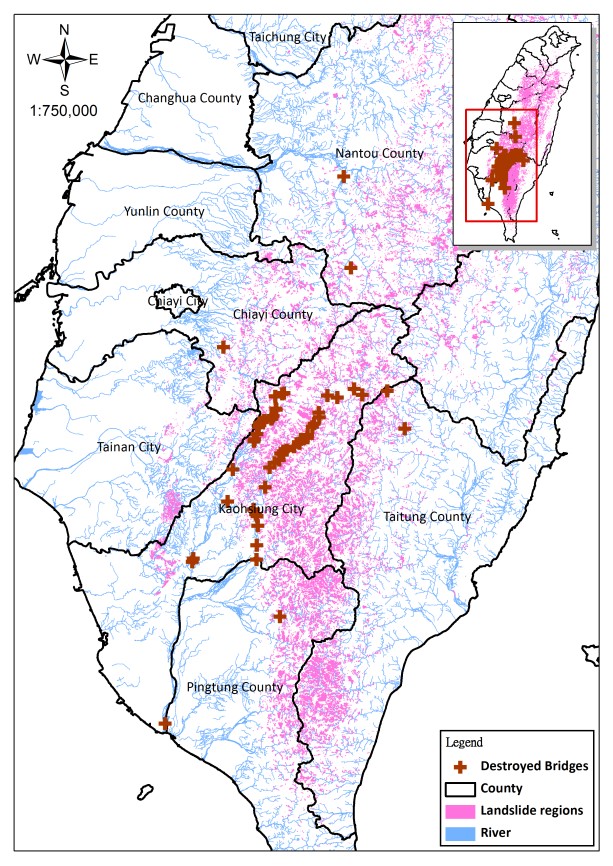