A41C-3061:
The Impact of Boreal Summer Intra-Seasonal Oscillation on the development of extremely wet and dry condition in South Asian Summer Monsoon

Boreal Summer Intra-seasonal Oscillation (BSISO) is known to have a strong impact on the development of drought in South Asian Summer Monsoon (SASM). Our research found that in 6 of 8 past extremely wet / dry SASM years, monsoonal precipitation tendency dynamically reversed during May to July, associated with BSISO (figure). Since the predictability of BSISO is greatly limited, the perturbation associated with BSISO could be the main causality of the difficulty in seasonal prediction. Careful analysis on the atmospheric condition in 2002 and 2003, which are extremely dry / wet year with seasonal dynamical change of precipitation tendency, revealed that BSISO influenced on the development of both extremely dry and wet rainy season. The key factor of the influence of BSISO on the development of wet/dry atmospheric condition is the difference in the northward propagating activity of BSISO. Though it is already known that northward propagation of BSISO active (phase 1-4) phase depends on the environmental atmospheric condition [Jiang et al., 2004; Wheeler and Hendon, 2004], break (phase 5-8) phase northward propagating activity is also revealed to be different between various environment. In 2002, both of active and break convection of BSISO contributed to the development of dry condition. Both of those phases created convergence over Pakistan and north India (SASM region) in the upper troposphere. On the other hand, the opposite effect was caused by the BSISO of 2003. In order to show the generality of this impact of BSISO, theoretical analysis and carefully designed numerical experiment with Weather Research and Forecasting model (WRF) were conducted. We created a convection which shares common characteristics with BSISO by the forcing of sea surface temperature (SST). Further analysis revealed that northward propagation of BSISO differs depending on strong (weak) vertical shear of wind and with plenty (meagerness) of specific humidity in planetary boundary layer. BSISO could have a negative feedback on the development of extremely dry / wet condition through the difference in the northward propagation. For the effective management of water resources, the further understanding of the influence of BSISO on extremely wet rainy season should be needed as well as the drought events. 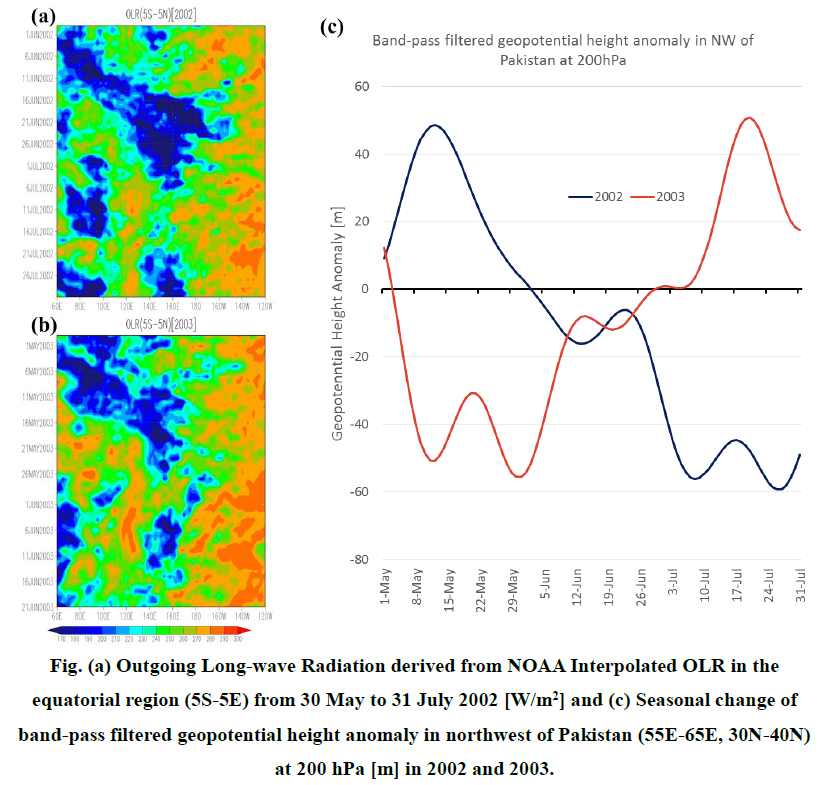