H33D-0849:
Observations of Chemical Transport and Reaction in Porous Media in 3D with Applications to Understanding the Role of Heterogeneity in Reactive Transport

Processes involving feedbacks between chemical reaction and fluid flow through porous media are poorly understood. Non-reactive and reactive core flooding experiments have been carried out in sandstone and two carbonate cores with varying degrees of heterogeneity. The dispersion, mixing and reaction of chemical components in an aqueous solution injected into rock cores were visualised in 3D with the use of chemical dopants and a medical x-ray CT scanner. With regards to solid-fluid reactions, the impact of rock dissolution on subsequent chemical transport was observed by injecting a carefully selected acidic solution. Simultaneous observations of the permeability evolution were made along with analysis of the effluent chemistry using an ICP-MS. This has resulted in a high quality 3D data set of the space and time evolution of the concentration of aqueous chemical components in non-reactive and reactive core-flooding experiments in rocks with different degrees of heterogeneity in combination with precise data of the effluent composition and rock permeability. This will allow us to assess the effect of flow and transport heterogeneity on upscaled effective reaction rates. Furthermore, these observations can be used as a future benchmark test for numerical models for chemical transport and fluid-solid reactions and in the development of upscaling techniques for accurate and efficient modelling of chemical processes during flow in porous media. 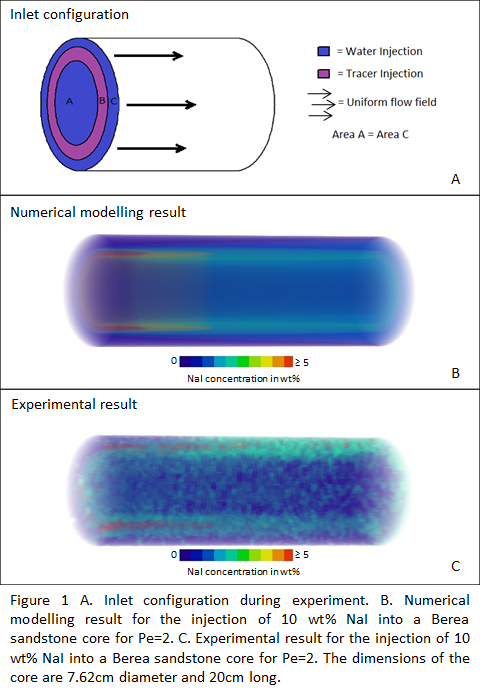