Biosphere-atmosphere exchanges of carbon dioxide are an important component of the global carbon cycle, and understanding current exchanges is crucial for predicting future uptake of anthropogenic carbon dioxide. Agricultural systems in the Midwestern United States cover a large area and have the potential to influence the future carbon budget of the United States. Biosphere-atmosphere exchanges of carbon dioxide are typically measured at the ecosystem level using the eddy covariance technique that covers a relatively small spatial area. Top-down approaches using a global network of carbon dioxide concentration measurements provide relatively coarse spatial information. High altitude balloons (HABs) are an inexpensive platform for sounding the vertical structure and composition of the atmosphere that can bridge the spatial gap between these two other techniques. The HAB platform will also complement new satellite measurements of carbon dioxide from the Orbiting Carbon Observatory-2. In the first-generation approach of the HAB technique, a single balloon is launched, and a vertical profile of carbon dioxide is recorded during the balloon’s ascent. The balloon bursts between 11 and 14 km altitude, and a second profile of carbon dioxide is obtained during the descent. The difference in carbon dioxide concentration is computed as a function of altitude, which is converted to a molar difference by accounting for the temperature and pressure profile of the atmosphere, and then a flux is obtained by summing the molar differences and dividing by the time difference between ascent and descent. The second-generation approach uses two balloons and compares their ascent profiles. This is an improvement, since the balloon can travel 100 km due to the strength of the jet stream, making it difficult to compare ascent and descent profiles. The technique works best on days with a well-developed convective boundary layer. During peak growing season, uptake rates of -30 to -50 μmol m-2 s-1 are observed, while positive values are obtained at the beginning of the growing season and during a severe drought. 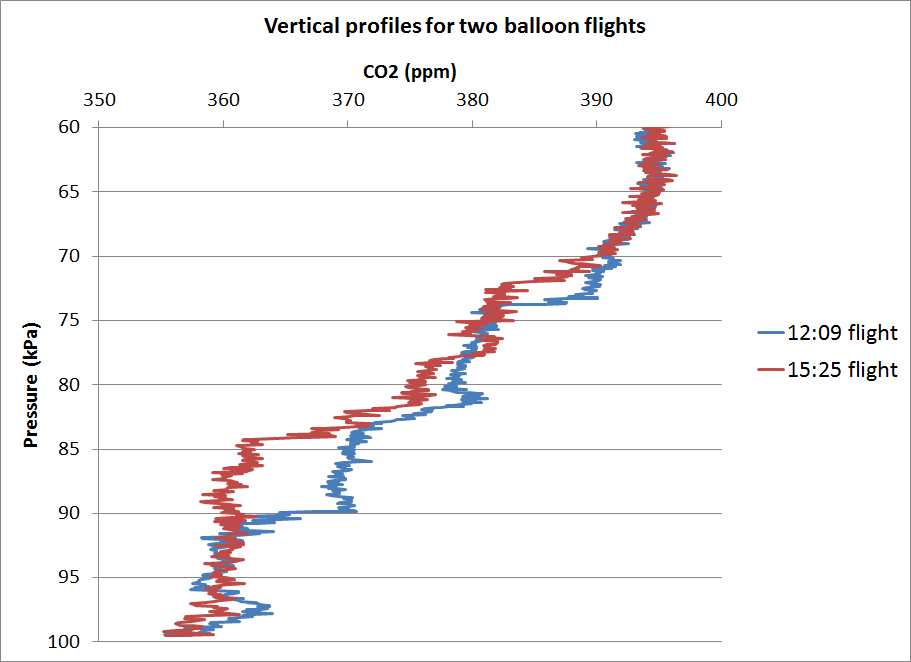