B33E-0217:
Impact of Climate Change on Sugarcane Crop at Regional Scale: A Study with Remote Sensing and GIS

This study investigates the effect of climate on the growth and yield of sugarcane at the Bagalkot region of Karnataka state in India which generally famous for the sugarcane production in the country. In the present study climate parameters like rainfall, temperature, solar radiation, soil moisture, humidity etc. observed from multi-source observations like remote sensing satellite, NCEP reanalysis, India Meteorological Department (IMD) observations etc. are used to analyze the climate change over the study region in terms of the climatology, inter annual variability and trend analysis of the climate parameters at long term scale. There is a signature of increasing trend in temperature and decreasing trend in the seasonal monsoon rainfall. Impact of drought years on the sugarcane crop has been determined. To quantify the climate change the Land use Land cover (LULC) classification of the region is carried out and the relative changes in different LULC classes are discussed, which shows the agriculture is being decreased in 14 years of the analysis. Then to know the impact of climate parameters and on the sugarcane crop production, the correlation analysis of the climate parameters and sugarcane yield are presented using the real observation and which clearly showed the solar radiation is highly correlated with the sugarcane production compared to other climate parameters (Figure 1). The satellite derived NDVI is used to compute the NDVI Grand Growth Period [∑NDVI(GGP)] and the correlation of it with sugarcane crop yield for the period 2000-2013 and the empirical relation is derived, which can be implemented in future with some weather forecasting models like General Circulation Model (GCM) for the prediction of the sugarcane yield in advance. 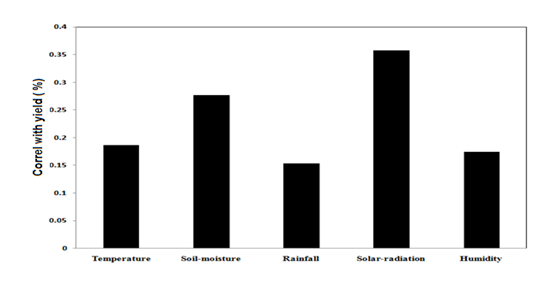