Following an 18-month period of quiescence at Volcán de Colima – the longest seen since the beginning of the 1998 eruptive regime – the latest effusive period was heralded by the partial destruction of the 2007 lava dome by a significant explosion on 6th January, 2013. Subsequent small Vulcanian explosions, which have been more frequent than during the preceding 2007-2011 effusive period, have accompanied the extrusion of new lava. The effusion, which continues to the present day (July, 2014), has been monitored by monthly overflights in a light aircraft, allowing aerial surveys of the activity through the capture of oblique photographs and thermal infrared imagery. Using ‘structure from motion’ based photogrammetric analysis of the photographs has enabled metre-to-sub-metre resolution digital elevation models (DEMs) to be produced[1], from which volumetric and morphological changes to the dome can be assessed. Although extrusion of lava was observed on the 10th January, it was not until a subsequent survey on 25th February, in which a newly emplaced blocky dome was apparent in the excavated crater, that a reliable effusion rate could be calculated. The derived volumetric change, excluding losses due to minor explosions during this period, represents an effusion rate of <0.1 m3s-1, similar to that of that of the 2007-2011 effusion period (~0.02 m3s-1) and indicative of another period of slow growth. Continued growth of the dome led it to overflow the crater and form a lava flow, as detected in the survey of 21st March. The combination of regular oblique photography with a consumer camera and the use of modern 3D photo-based reconstruction software has enabled unprecedented numbers of DEMs to be produced for activity at Colima. We explore the potential of integrating the thermal data with the surface models for visualisation of areas of elevated activity. 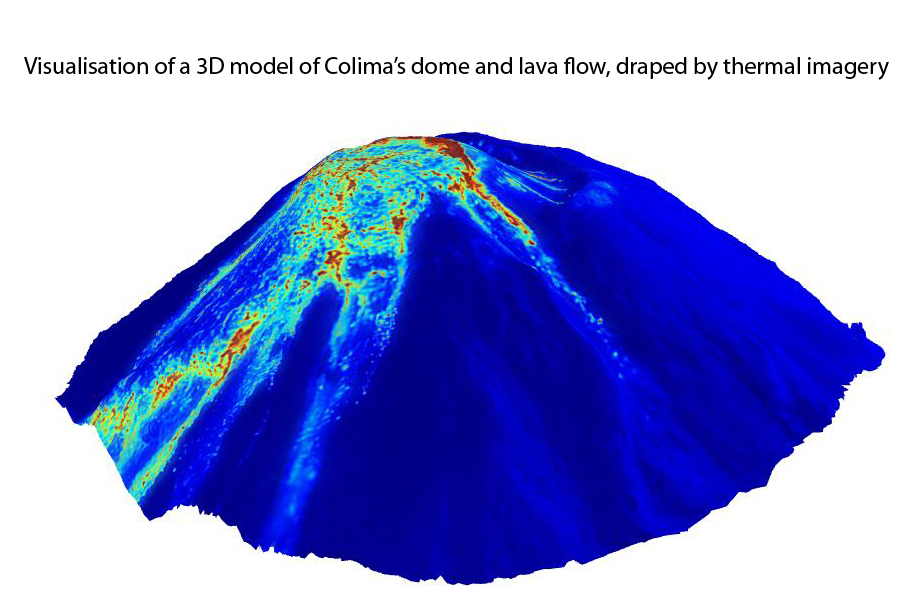