GC21J-04:
Solar geoengineering to limit the rate of temperature change

Solar geoengineering has been suggested as a tool that might reduce damages from an-
thropogenic climate change. Analysis often assumes that geoengineering would be used to
maintain a constant global mean temperature. Under this scenario, geoengineering would
be required either indefinitely (on societal timescales) or until atmospheric CO2 concentra-
tions were sufficiently reduced. Impacts of climate change, however, are related to the rate
of change as well as its magnitude. We thus describe an alternate scenario in which solar
geoengineering is used only to constrain the rate of change of global mean temperature; this
leads to a finite deployment period for any emissions pathway that stabilizes global mean
temperature. The length of deployment and amount of geoengineering required depend on
the emissions pathway and allowable rate of change, e.g. in our simulations, reducing the
maximum 0.3C/decade rate of change in an RCP4.5 pathway to 0.1C/decade would
require geoengineering for 160 years; under RCP6.0 the required time nearly doubles. We
further note that a decision to terminate use of solar geoengineering does not automatically
imply rapid temperature increases: feedback could be used to limit rates of change in a
gradual phase-out.

Second, we demonstrate that feedback control can limit rates of change in a climate
model. This involves a related observation – in any future implementation, models used
to predict behavior will not be perfect, and adjusting the level of solar geoengineering in
response to climate observations is essential. This feedback process is thus essential for
managing uncertainty (and is the answer to the question of how we can engineer a system
that we don’t fully understand). Once this feedback is included, however, meeting some
particular objective (such as a specified rate of change) can be achieved without an accurate
model of the climate system. 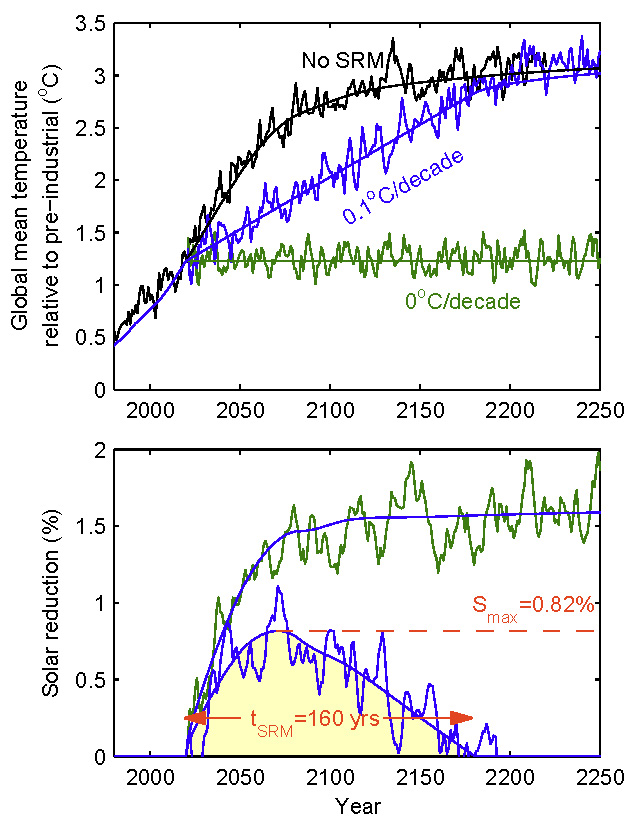