C41B-0353:
Ice Cliff Backwasting over debris-covered Glaciers – Insights into their Formation and Development based on new Measurements and a point-scale Model

The presence of ice cliffs has been identified as one possible reason for relatively high overall ablation rates on debris covered glaciers. Few measurements exist for such cliffs and their formation and evolution processes are still poorly understood. On Lirung Glacier, in the Nepalese Himalayas, numerous cliffs were monitored for two consecutive years in the pre- and post-monsoon season. Slope varied between 30° and full vertical faces. Backwasting rates were highly variable depending on slope and aspect of the location on the cliff. Only a physically based energy balance model can reproduce this heterogeneity and provide insights into the importance of atmospheric forcing and cliff characteristics on their melt.

Building on two previous studies such a model was developed. It was improved with measurements of radiative fluxes perpendicular to the cliff and by applying a high resolution DEM of the surrounding topography to estimate shading and radiative fluxes incident to the cliff including longwave radiation emitted by surrounding debris. We obtain a considerable reduction in incoming shortwave radiation for north-oriented cliffs compared to horizontal measurements, and significant incident longwave component that varies with height on the cliffs. Melt rates are highly variable in time and space for the cliff. While maximum values of up to 8 cm/day are reached during monsoon, melt rates in the post-monsoon season are considerably lower than in the pre-monsoon season. Nighttime refreezing processes during this period also played an important role. Apart from topography, cliff backwasting is extremely sensitive to albedo of the ice surface, reaching values as low as 0.05. Measurements of surface temperature and wind on the cliff further improved the understanding of outgoing radiation and turbulent fluxes.

Once validated against stakes readings, the model was used to explain the presence and persistence of cliffs over Lirung glacier. We show that only North facing cliffs persist over a monsoon season, with very high backwasting rates between May and October. Long wave radiation is more important at the bottom of cliffs and highly variable from cliff to cliff, while shortwave radiation is very high for South facing cliffs, the upper portion of which recedes quickly leading to the disappearance of those features. 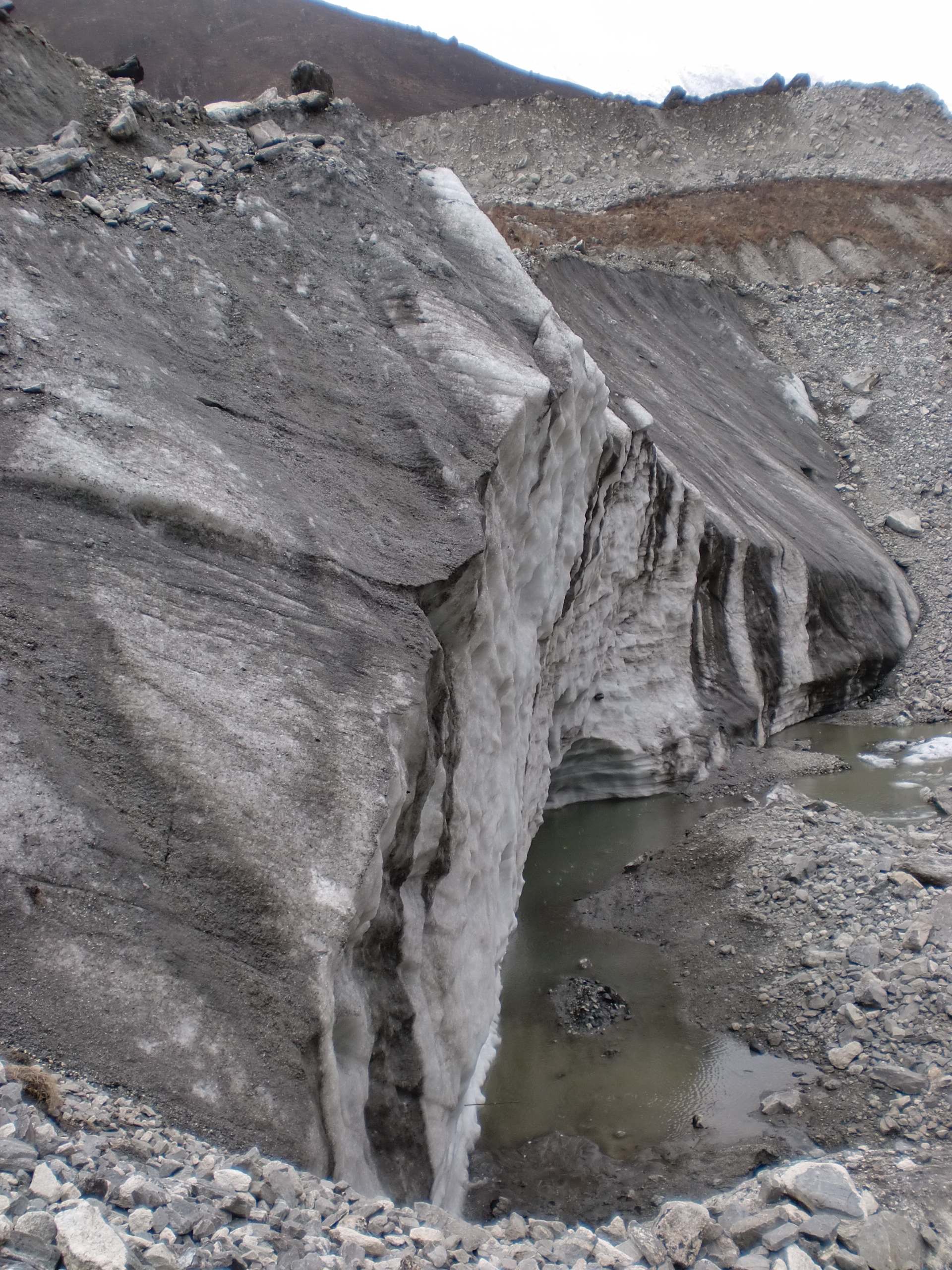