The dramatic asymmetry in terms of surface elevation, Cenozoic volcanisms, and earthquake activity across the Red Sea is an enigmatic issue in global tectonics, partially due to the unavailability of broadband seismic data on the African plate adjacent to the Red Sea. Here we report the first results from a receiver function study of the mantle transition zone (MTZ) discontinuities using data from the Egyptian National Seismic Network, and compare the resulting depths of the 410 and 660 km discontinuities (d410 and d660) with those observed on the Arabian side. Results using more than 6000 P-to-S receiver functions recorded at 49 broadband seismic stations in Egypt, Saudi Arabia and adjacent areas show that when the IASP91 Earth model is used for time-to-depth conversion, the resulting depth of the discontinuities increases systematically toward the axis of the Afro-Arabian Dome (AAD) from both the west and east. Relative to the westernmost area, the maximum depression of the 410-km discontinuity is about 30 km, and that of the 660-km discontinuity is about 45 km. Highly correlated d410 and d660 depths suggest that the observed apparent depth variations are mostly caused by lateral velocity anomalies in the upper mantle, while the 15 km additional depression of the d660 relative to the d410 requires either a colder-than-normal MTZ or the presence of water in the MTZ. We tested several models involving upper mantle and MTZ velocity anomalies and undulations of the MTZ discontinuities due to temperature anomalies and water content, and found that the observed systematic variations can best be explained by a model involving a hydrated MTZ and an upper-mantle low-velocity zone beneath the AAD (Mohamed et al., 2014, doi: 10.1093/gji/ggu284). Models invoking one or more mantle plumes originated from the MTZ or the lower-mantle beneath the study area are not consistent with the observations. 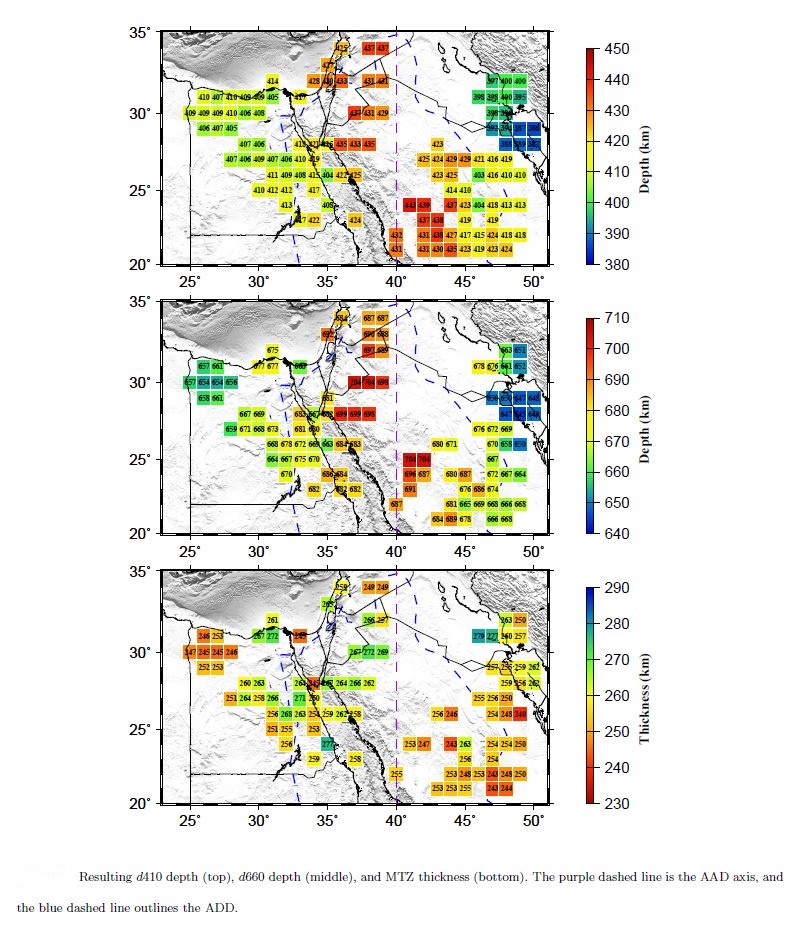